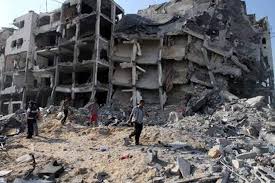 Prime Minister Imad Khamis considers the issue of reconstruction one of the most important issues on the government’s table. Hundreds of thousands of homes have been destroyed by the actions of terrorists, and many people have been displaced. But is it possible for the state to prepare everything required for the reconstruction and rebuilding process if the building and housing sectors are absent from its mind? Of course not.

In an interview with Al-Watan, the Prime Minister said: “We have begun and developed important rubrics. There are legal and other steps regarding funding underway, as well as with regards to studies and executive plans. We have held more than ten meetings in this respect with the aim of rebuilding the housing sector.”

He added: “The first step we announced was that every area destroyed by terrorists must have new organizational plans, from the administrative units to the city. We started with this at the beginning of last year and through field surveys in Aleppo city we found that the best steps to achieve real progress lie in preparing new organizational plans for the informal areas and areas damaged by the actions of terrorists, as well as safe areas and the commercial infrastructure. Contemporary organizational plans have been completed to achieve real development, and this has been one of the most important outputs of the government in Aleppo.”

Khamis added that the second step regards the need to rebuild about 500,000 homes damaged by terrorists. This requires trillions of Syrian pounds, which is not currently available. However, there are alternatives.

“The state is the only one who can prepare legislation for this sector and develop laws that regulate the means of carrying out reconstruction, such as the Union of Housing Cooperation and the real estate development companies that we have met with. Some of the building will be done by state institutions, such as the Public Corporation for Housing. The other portion will be done by real estate development companies. The private sector is an active partner in reducing the burden on the state,” the prime minister said.

The third step relates to the Union of Housing Cooperation. For 40 years housing associations had been an entryway to secure housing funds for Syrian citizens at appropriate prices. “In order to restore its activity, without the corruption which has plagued the sector both during and before the crisis, we halted the associations for a period to review them and ensure they are serious” he said.

Khamis added: “We have 2,600 associations. If they were all serious, there wouldn’t be a housing crisis. Therefore we are working to find out how serious and active they are and seeing if they can partner with us. After the Ministry of Public Works finished preparing the necessary studies and evaluating the companies, work to regulate the residential associations will begin in the coming weeks. This is to reassure every Syrian citizen that we will not leave the housing sector, which was destroyed in large part, to a random fate. We will not leave the citizen on their own. We will work out what is causing the problems in the sector and with organised participation we will be able to rebuild the housing sector and the homes lost in a suitable manner.”

Khamis concluded: “The state which was able to triumph in the war will be able to create relationships built on mutual respect with allies and states which stood with the Syrian people. The states and entities which participated in shedding Syrian blood will have no role. Neither in the open or hidden in shadow institutions.”