During the first two years of the Syrian Revolution, the regime treated the minorities like a polite child who did not make problems 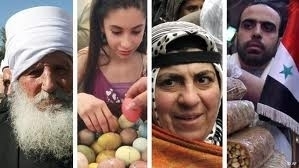 Soon after Saddam Hussein finished his bloody war against Iran, he turned toward the south to his first partner, Kuwait, and annexed it all at once. Saddam did not remember the continual [arrival] of oil tankers and the overflow of money that Kuwait had provided as in-kind support [to Iraq] against the "Iranian ghoul.”

During the first two years of the Syrian Revolution, the regime treated the minorities like a polite child who did not make problems. It put members of minorities in unexpectedly high posts that they didn’t dream of holding during Assad’s policy of sectarian division applied by the regime in the recent decades. Even the few regime opponents from the minority groups were not treated in the same way while in detention as the detainees of the majority were treated.

Nevertheless, the regime did not succeed in turning these minorities into active combatant militias on the ground, which could have protected the regime or created a balance with the forces of the revolution. But this does not negate the involvement of hundreds of members of minorities in combatant militias on the side of the regime such as the “Army of National Defense” and others. The regime, unable to bush minorities further, made his intention of bringing the sectarian militias such as Hezbollah and Abu al Fadl al Abbas very urgent. Soon the regime’s media began to propagate the idea of minorities being in the cause of self-defense and supporting the regime rather than protecting it, which means their role was transformed from protecting the regime to protecting their areas. Thus, the regime has exempted itself from the future consequences if it manages to survive.

The militias fighting on the side of the regime have taken over a lot of the missions from regime forces and the fighting members of minorities, which have become a kind of local order-keeping forces, so that the regime will be able to exercise strategic control over the foreign forces once their tasks have ended. In fact, a large part of the foreign forces are dealing with the issue as a "business” more than a holy war. The fact that these militias do not have the social incubating environment that would allow them to penetrate the inner workings of the country more easily compared to the dangers of regaining the acquired privileges of minorities during the weak central administration or [returning to the fold of obedience again].

The scenario is still open to many possibilities, although a new chapter has recently begun in the relationship between the regime and minorities. What was accepted reluctantly by the regime in the past because of considerations concerning the minorities will no longer acceptable in the same way because the regime has enough burdens. So the regime will not hesitate to alleviate the burdens whenever it can—and it seems now is the opportunity enabling the regime to proceed with a reversal of its approach to minorities.

It’s a logical result to those who know the regime closely, even if it has come so early.