Volker Perthes is the executive chairman of the German Institute for International and Security Affairs (SWP), in Berlin 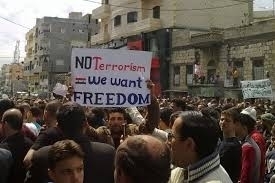 In 2011, the conflict in Syria began with peaceful protests for human dignity and political reform. The Asad regime drew its lessons from Tunisia and Egypt and opted for what it called a “security solution” (al-hall al-amni), i.e., the repression of any protest by military force. This in turn triggered defections from the armed forces and a militarisation of the uprising. From mid-2011, the conflict evolved into a civil war, a bloody struggle for power in Syria, which increasingly became overlaid with a regional struggle for Syria.

Confessional polarisation has increased, but the conflict in Syria is not a confessional war. It has a strong international dimension, but the United States, the EU, and even Russia regard is as a regional problem which they don’t want to be dragged into.

Regional powers pursue their geopolitical interests in Syria, but the conflict is not a proxy war: Bashar al-Asad is not fighting for Iran, but for his own power. Most regime loyalists are not even fighting for Asad but feel forced to defend the existing regime out of fear for their own survival. The state-oriented or “patriotic” opposition is seeking the support of Europe, the U.S., Turkey, Saudi-Arabia and other states. It is not fighting for their interests, though, but – still – for a better Syria.

Jihadists such as the “Islamic State in Iraq and the Levante” (ISIL) follow their own nihilistic agenda which is not about the future of Syria. The regime is not actually fighting them but benefits from their presence inasmuch as they weaken the opposition and inspire fear among the moderate majority of Syrians.

The longer the war drags on, the more likely Syria will fall apart. Geopolitically, a fragmentation of Syria would dissolve the post-Ottoman (or: Sykes-Picot) order in the Arab East. Syria’s territorial borders with Iraq and Lebanon have already begun to evaporate. Geo-culturally, a breakup of Syria would destroy the very idea of multi-confessional and multi-ethnic states in the region. New political entities would be mono-cultural and, at best, display some degree of “tolerance” for minorities.

It is clear today that the regional state system can only be preserved if the war in Syria ends. It is also evident that none of the warring parties will be able to achieve a military victory and maintain the Syrian state in its current territorial shape.

External players don’t control the fighting, but some international understanding will be needed to end it. At least the U.S., Russia, Saudi-Arabia and Iran will have to agree that they exclude a military victory by either side, and will no longer help their respective allies to achieve it. Peace talks can be externally mediated and supported, but Syrians need to agree about the future of their country among themselves. The UN-mediated Geneva process should be maintained. As it centres on the relationship between government and opposition, chances for any breakthrough are slim. “Geneva” should therefore be complemented by a “Syrian Ta’if”: a consultative gathering outside the country of respected citizens from all Syrian regions, ethnic and confessional groups to find out whether and on which basis Syrians still want to live together in one state. Asad will continue to reject any real transition, but many Alawis and the majority in regime-held areas would favour it. Parts of the opposition will refuse to share power with regime representatives; but most people in opposition-held territories will prefer power-sharing to war. Bringing credible societal representatives together will not end the military confrontation immediately, but it could create the basis for a new social contract and thereby change the political dynamics of the conflict.

* Volker Perthes is the executive chairman of the German Institute for International and Security Affairs (SWP), in Berlin.