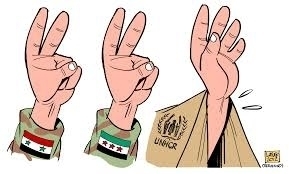 Prior to 2011, our job was limited to writing a few annual reports and sending them to the main centers that dealt with human rights violations. The regime was the only party committing these violations, and we didn’t have any immunity to protect us from the regime’s brutality. Many of us have been arrested, tortured, and have lost our jobs as punishment for documenting these violations. When the events began in 2011, we were on the front lines. At first, the regime was committing violations against peaceful protestors, but this did not last for long. [Soon], the same violations were being committed by people on the other side, and we were seen as enemies of both sides of the conflict. The rising violence made it hard for us to seek the truth in this hostile environment, since both sides had instructed their supporters to harass us wherever we went. Moving about to get the truth was almost like walking through a minefield, we were armed only with a pen, our belief in what we were doing, and our moral responsibility.

When the events began, I heard about crowds gathering in one of the hot zones, so we expected a clash between civilians on both sides. Believing that it was more important to stop the problem rather than document it, I rushed there, and was able to calm the crowds with the help of my friends. Then, as usual, I was called to one of the security departments. I was interrogated for several hours and then released.

During and after the year 2012, the violence escalated. Our job became collecting information from eyewitnesses, or cross-referencing different stories from different sources to get the closest thing to the truth. Then we would go back at night and wait for the power to return [in order] to document the information we had obtained, and then send it to them. We often depended on messages sent to us by secret friends to inform us about any incident, so we would rush to the location and document the truth as it was, before people started telling it their own way.

One afternoon in 2014, I went to pay respect to the family of a young man who was killed in a bloody battle between the regime army and the radical fighters in Raqqa. When I went there, the smell of death was everywhere, along with eyes full of tears and rage. The body hadn’t arrived yet, but the people there were used to this—since the beginning of the events, the regime used to hide the bodies of its victims to ease their families’ indignation and to raise the spirits of supporters. Only this time, the modern communication methods did their job, and a video (that was published on YouTube) showed the victim’s head hanging on a wall. My heart was beating fast as I entered the tent; I paid my condolences to the father and sat beside a friend.

I was there for only a few minutes when someone pointed at me, introducing me to the others. He said that I was a human rights activist, so everyone looked at me, but of course not all looks were friendly. “What do activists want with us,” one of them asked with a harsh tone. I had to answer, so I tried my best to keep a calm tone and said, “I am here to share your grief, it’s my duty.” The angry man then replied, “Thank you for that, but you are not one of us if you don’t support our army.” At that moment I felt that the people there were looking for anyone to pour their anger and pain against, and that I might be that one, I said “We support all those who seek justice, are fair to the innocent, and condemn the guilty. I don’t want the rights of the victims to be lost.” He said sarcastically, “You won’t even call them martyrs, you say victims and our boy is a martyr.” I replied “It is not our job to grant awards or descriptive certificates, we see them all as victims.”

The conversation had already been over when someone approached me with a cellphone, and sat beside me to show me a video. At first I looked away, but then I watched it. It was a video of dogs tearing a dead body. He asked me if I knew who this dead person was, and I said I didn’t, so he told me that it was his son-in-law, who was killed in brigade 17 (a pro- Assad brigade), and he was thrown to dogs.

All parties to the conflict in my country insist on showing their brutality. They want to awaken our worst prejudices. Dozens of videos were leaked before, in order to show the brutal torture the regime committed inside its prisons. Now, dozens of videos are being published showing slaughters being committed by the radical Islamic opposition. How much sense do we need to stay sane with all this infinite insanity?

I memorized some information and left the tent, and I wandered for a long time. When I got home, I couldn’t eat or smile at my little kid, which is something my children had become used to. I am not the only one who feels this pain, many people do. Many of those who work with us have been arrested or kidnapped, by all warring sides. Some of us could not carry on any more, and they escaped. We are the cry against their brutality, so help us, please, to carry on with our job. When one of us escapes this hell, help them gain back a part of their humanity.