Tehran is helping Assad cope with his manpower shortage by recruiting mercenaries in Lebanon, Afghanistan, Tajikistan, and Iraq 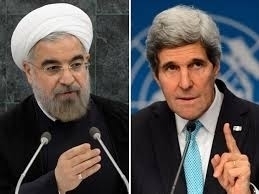 What does a salesman do when he knows that the product he is pushing is not what it is claimed to be? He tries to stress other advantages the buyer would enjoy, for example winning a box of chocolates or a free holiday.

This is what US Secretary of State John Kerry and Iranian President Hassan Rouhani are doing with the nuclear deal they say they have made in Vienna.

Rouhani knows that, if fully implemented, the “deal” could put Iran under tutelage exercised by the six big powers involved in the talks, with the blessings of a United Nations Security Council resolution.

And that would make a mockery of Iran’s claims of being a “big power” seeking a zone of influence in the Middle East, let alone claiming global leadership.

To hide that fact, Rouhani is promising milk and honey when Iran’s frozen assets pour into the national economy, creating “millions of jobs.”

In other words, he says: forget the “deal” itself, think of all the goodies it could bring!

For his part, Kerry is intelligent enough to know that the “deal” will in no way block Iran’s path to making a bomb if it so wished. So he too is trying to sell his bad product by highlighting fringe benefits.

That became clear during the Senate hearings in Washington.

The first fringe benefit that Kerry dwelt upon was that the “deal” would persuade Tehran to engage in negotiations regarding other problems such as exporting terrorism, making mischief in Syria and Lebanon, and holding American hostages.

Kerry claimed that Iran’s Foreign Minister Mohammad Javad Zarif and President Rouhani informed him that they have no authority to negotiate on those topics at present, but both have told him “very clearly” that, after the “deal,” they are ready to discuss regional issues.

To illustrate Zarif’s goodwill, Kerry related how he told the Khomeinist foreign minister to stop a ship heading for Yemen last spring. According to Kerry, Zarif acted immediately and the ship, launched with fanfare, quickly returned to Iran.

The second fringe benefit that Kerry advertised was that the “deal” gives control of Iran’s frozen assets to the P5 1 powers in which the US has leadership. For 15 years the US would have a big say on how Iran spends a large part of its own money.

The most important fringe benefit that Kerry cited was the third.

He said that the “deal” was designed to weaken “extremists” within the regime and help “moderates,” led by former president Akbar Hashemi Rafsanjani, to win power in the next elections for the Islamic Majlis and the Assembly of Experts and, later, the presidency.

“If we turn our back to the [nuclear] agreement, no one knows what would happen to Rouhani in the next elections,” he said. He wants Rouhani to win a second term.

Kerry’s statements show that all along during the negotiations he, and presumably other P5 1 representatives, were pursuing a parallel process aimed at promoting change within the regime in Tehran.

In other words, the nuclear issue was a pretext for a bigger goal.

Of course, if Iran becomes a normal power it wouldn’t really matter whether or not it has the bomb.

History, however, shows that those who do something in the hope of gaining something else almost always end up as losers.

The wisest political course is to remain focused on a clear objective. In this case, Iran had violated the Nuclear Non-Proliferation Treaty (NPT) and needed to be taken to task in accordance with its provisions, nothing more and nothing less.

Kerry and his colleagues, almost certainly guided by the rudderless Barack Obama, tried to fudge the real issue with lengthy and often meaningless texts in the hope of helping “moderates’ win power in Tehran. They confused the prey with its shadow.

Kerry’s analysis is marketed by a network of pro-Tehran lobbyists in the US and Europe that includes prominent members of the foreign policy and security establishment.

Over the past two weeks some of them, including a couple of prominent British politicians and several US “think-tank” gurus, have bombarded me with advice regarding the “importance of helping Iranian moderates” win power to isolate, and, later, hopefully get rid of “Supreme Guide” Ayatollah Ali Khamenei.

“Rouhani is a man we have known for 25 years,” a former British cabinet minister tells me. “He is a man we could work with to bring Iran back into the international fold.”

The phrase “the man we could work with” is borrowed from the late Mrs. Thatcher, who used it to describe Mikhail Gorbachev, the man who presided over the dissolution of the Soviet Empire.

At times, Obama talks of helping “elected organs” of the Khomeinist regime against “un-elected” ones.

First, there has never been anything resembling a free election in the Islamic Republic. Rouhani’s election was as fair or as unfair as that of his predecessor Mahmoud Ahmadinejad. And the next elections will be conducted within the same rules imposed by the mullahs.

The second point he forgets is that the “un-elected organ,” by which he means the “Supreme Guide,” is also elected by the Assembly of Experts whose members are in turn elected, supposedly by the people in the same way that Rouhani or Ahmadinejad were.

Even then, the assumption that the Rafsanjani faction, of which Rouhani is the current public face, is interested in reforms is far-fetched to say the least.

Now in the third year of his four-year term, Rouhani has not even presented, let alone implemented, a single reform in any domain.

The economy remains hamstrung by Soviet-style controls worsened as a result of massive corruption.

More publications have been shut than under Ahmadinejad.

The number of prisoners of conscience has almost doubled along with the number of executions.

Rouhani has even published a draft bill to create a new category in Iranian law: political crime.

Former Prime Minister Mir-Hossein Mousavi and his wife Zahra Rahnavard and former Majlis Speaker Mehdi Karroubi remain under house arrest without charge. Their situation has worsened because of a ban on visits from their close relatives.

Under Rouhani the Islamic Republic holds five US hostages, the largest number since the 1980s.

Abroad, exporting terror has intensified with a 32 percent rise in the budget of the Quds Force which controls Iranian networks such as Hezbollah in Lebanon.

Tehran has also increased its stipend for the group around Syrian despot Bashar al-Assad. Tehran is also trying to help Assad cope with his manpower shortage by recruiting mercenaries in Lebanon, Afghanistan, Tajikistan, and Iraq. (Rouhani is afraid of sending more Iranians whose death in action could trigger domestic problems.)

Kerry, I think rightly, has warned that forcing Iran to surrender is a fantasy.

But he is chasing an even more dangerous fantasy: helping a regime in deep crisis regain its bearings and do more mischief at home and abroad.