Opposition responds to U.N. envoy's questions on a proposed transitional governing body, reforming security agencies and dissolving parliament, ahead of the resumption of negotiations this Wednesday in Geneva 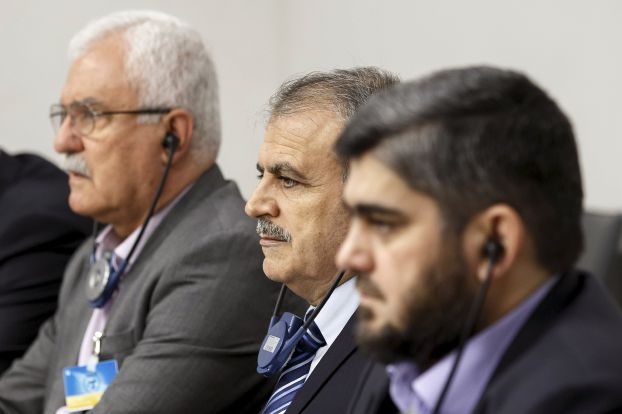 The opposition High Negotiation Committee in Geneva has insisted on their own principles while answering a series of 29 questions presented to both sides by U.N. envoy Staffan de Mistura. Al-Hayat was able to see the opposition’s suggestions, which largely consisted of forming a transitional governing body with full executive powers and dissolving the national parliament. In addition, the formation of new executive institutions including a national security council to oversee the restructuring of the army and the security agencies.

Suggestions also included constitutional changes, broadening the powers of local administrations and to provide a new study of the sectarian and national components "that will not lead to sectarian or racial quotas."

De Mistura handed two documents to the delegations of the Syrian government and the opposition during the last round of the Geneva conference. The first document included 10 questions discussing basic ruling principles, while the second included 29 detailed questions about the "government" under U.N. Resolution 2254, which calls for Syrian negotiations to establish a non-sectarian, credible and full government. This government should prepare for a new constitution, as well as new elections supervised by the U.N. and with the participation of all eligible Syrians, even those abroad.

According to one of the drafts that Al-Hayat was able to see, the Committee focused on the "transitional governing body" and its institutions so that this body would be "authorized to run the country in the transitional period,” with full powers that allow it to "preserve the peace and normal life". According to the document, the priorities of this body should be "releasing all prisoners, treating all injured, removing all military and security checkpoints, and bringing students back to schools."

The Committee’s suggestions included establishing new institutions that report to the "governing body," including an executive government, a national security council, a judicial body, and an inspection and control body. This government would consist of a number of members from both the regime and the opposition, and each party would have the right to "justified objection under special terms and conditions assigned by the U.N." The opposition also suggested that the government and its institutions would include all "the components, the regions and the political positions" with the possibility of reaching an international agreement on a demographic, political and regional map and the standards of choosing candidates for official positions. While preparing the draft document, Committee members answered to international demands and de Mistura's insistence that female representation must be at least 30 percent. Regarding the standards behind choosing candidates for the transitional government, the commission held on to the necessity of using a neutral democratic system. The candidate should be "a person who hasn't been convicted of any crimes or corruption and must be accepted by the other side."

The Committee also suggested preserving most state institutions but recommended dissolving the parliament that is due to be elected this Wednesday, while also reforming the security agencies and overhauling the army and the judicial system. It added that this government would be the ruling body with full powers and its executive tools are the judicial system, the police, the army and the reformed security agencies. New institutions should also be formed, like the national security council, judicial body, bodies for inspection and specialized committees. As for the powers of the president, they should be transformed immediately to the government, and the parliament and Baath Party must be dissolved, the Committee said. There is also a possibility to assign custody to the existing political parties that have been permitted in the past few years.
The draft also discussed reforming the army and the security agencies under the supervision of a new national security council. They also suggested the use of the police forces while the security agencies are being reformed, in addition to the formation of committees that will oversee "security management, supervision and punishment."