Interested parties from all sides are meeting in Geneva to discuss a new Syrian constitution, which the Russians hope will work in their favour writes Al-Modon 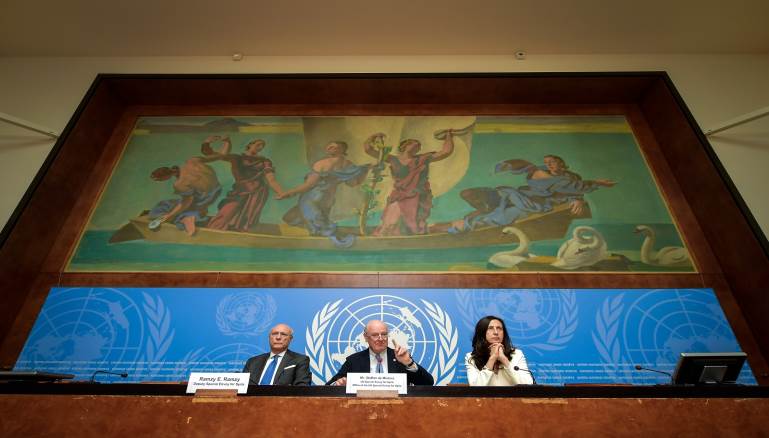 For the Russians, the constitution serves as a demarcation of a fait accompli which they have imposed by dominant military force in Syria. This demarcation requires legitimization that the Russians hope will enjoy international acceptance. Therefore, they are trying to implement this process through understanding with the United Nations through the Geneva platform.

The Russians want to implement this in partnership with the West. They know that their long-term control of Syria cannot be stabilized without Western approval. Therefore, the Russians agreed to transfer the issue of the constitution to Geneva, in order to arrange it with major Western powers and their regional allies.

Likewise, Geneva will be a base for a negotiations process whose two main parties are the “Astana tripartite” — Russia, Turkey and Iran — on one side, and the major Western powers — America, Britain, France and Germany — alongside Jordan and Saudi Arabia on the other. The Syrian constitution will be subject to this negotiations process.

But why has the Assad regime been provoked? The answer lies in the fact that the proposed Russian draft of the Syrian constitution contradicts their interest and threatens their absolute authority in governing. Therefore, the Assad regime insists on discussing the 2012 constitution, which it devised and approved itself. It rejects in principle issuing an alternative constitutional text, contrary to the desires of its Russian ally.

Meanwhile, the Geneva process advances around the Syrian constitution, amid a near-total absence of Syrians themselves. The voices of activists have been raised, warning of the danger of this turn, describing it as the final nail in the coffin of the Syrian revolution. This team of activists has called for opposition politicians not involve themselves in approving this negotiations process through participation.

Without a doubt, this description is correct. Jumping over the issue of establishing a transitional governing body, as stipulated by international resolution 2254, and limiting the entire Syrian crisis to the issue of the constitution is a step that aims to rehabilitate the regime and to end the fight against it through an open, truncated political process that reaccepts the regime as a participant in the international community and restores official communications between it and Western and regional countries, which are publicly hostile due to the regime’s crimes against Syrians.

Some respond that there is no longer a Syrian opposition in actuality. What now remains of political mobilization is only several opposition “platforms,” all of them representing the interests of some foreign party. This answer determines the answers of the previous questions. If there is no longer a Syrian opposition representing the Syrian revolution, how can we demand that these platforms, which represent foreign parties, act in ways contrary to the dictates of these parties?

Put simply, Syria’s gates are open. The constitution is the final step to entrenching the entry of foreign forces through them and legitimizing this entry. The remaining issue raises a question regarding the fate of the Assad regime’s rule. Syria’s situation is returning to the days when the French mandate was imposed upon it, and the armed resistance was unable to alter this situation. Its skills matured with experience, and alongside major regional and international developments, this led in the end to Syria’s independence.