To mark three years since the ouster of the Islamic State from al-Bukamal, celebrations were held, with large flags and pictures of the late Qassem Solemani reports Alsouria Net. 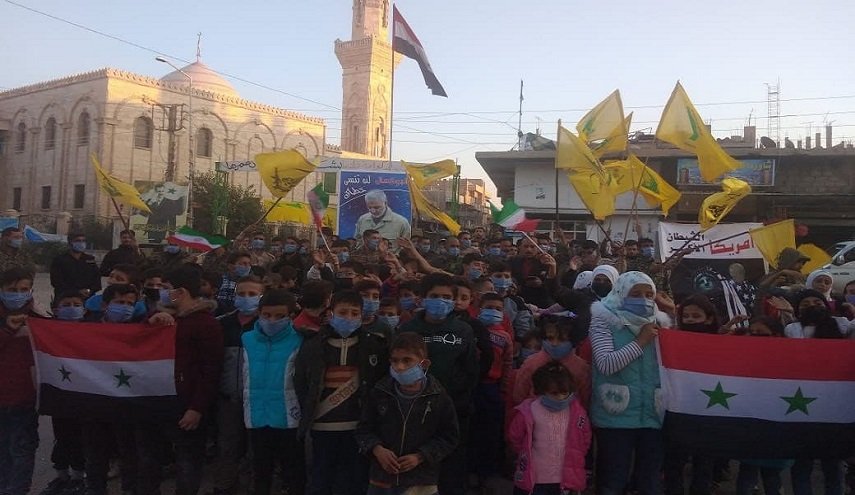 The city of al-Bukamal in Deir ez-Zor witnessed celebrations marking three years of control by Assad’s forces and Iranian militias,  following the expulsion of the Islamic State (ISIS).

According to photos published by pro-Iranian media on Wednesday, officers in Assad’s forces attended the ceremony, along with Iranian figures.

The pictures show the flags of the Lebanese Hezbollah and the Iranian Liwa Fatemiyoun militia, along with the image of the former commander of the Quds Force, Qassem Soleimani, who was killed earlier this year in a US bombing in Iraq.

Assad’s forces, with the support of Iranian militias, took control of the strategic city of al-Bukamal in 2017 after expulsion of ISIS.

The city of al-Bukamal, on the border with Iraq, is of great importance to Iran, whether militarily or at the economic level.

After the city was put under their control, it turned into a military focal point for Iran, who set up military bases in it, most notably the Imam Ali Base, which made al-Bukamal a target of frequent US and Israeli strikes.

The importance of the city also lies in its being a land transportation node, as it is the gateway of Iran to the Mediterranean and Lebanon, and the only corridor that connects Tehran, Baghdad, and Syria.

The Assad regime opened the al-Bukamal-al-Qa’im crossing on Sept. 30, 2019, after five years of it being closed, which was considered a strategic gain for Iran.

Given its importance, al-Bukamal was the first stop for the new Iranian Quds Force commander who was appointed to succeed Soleimani, Esmail Ghaani, last June.

The celebration comes days after the Iranian Liwa Fatemiyoun militia published pictures of what it said were military exercises without mentioning the location, while activists said that they could tell by the mountains shown in the pictures that they are near the city of al-Bukamal in Deir ez-Zor.

This also comes in light of the escalation of the cells affiliated with ISIS operations against Assad’s forces and Iranian militias in the Deir ez-Zor desert.