The Syrian regime’s forces launched an attack on the villages of al-Ftira and Sfuhon, but were stopped by Turkish backed forces, who destroyed a tank reports Zaman Al-Wasl. 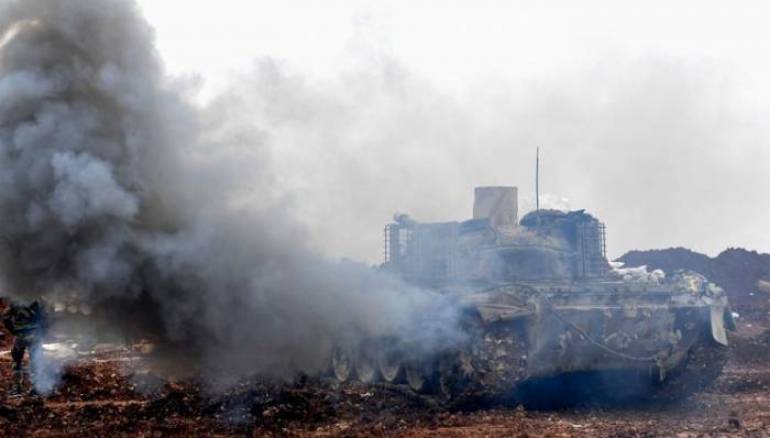 On Sunday, Syrian regime forces launched an attack on the southern region of Idleb province in a renewed breach to the three-week-old ceasefire.

The Russian-led forces used the heavy artillery and mortars in the attack on the villages of al-Ftira and Sfuhon, south of Idleb city.

Meanwhile, the Turkish army has constructed a new outpost as more military reinforcements keep pouring into the last rebel stronghold in northern Syria, according to activists.

The observation point set in the village of al-Mshayrfa on the M4 highway links Jisr al-Shughour with Bashar al-Assad’s hometown of Lattakia.

The truce halted a terrifying three-month air and ground campaign that killed hundreds and sent 1 million people fleeing towards the Turkish border.

The agreement did not force the Assad fighters to roll back significant military gains made in Russian-backed offensive over the past three months — a key Turkish demand prior to the talks.

Last Friday, the Turkish Defense Ministry assured in a statement that the planned deployment and distribution of troops in Idleb is continuing, and there are no withdrawals of troops from the region.

To stop the bloodshed and humanitarian crisis, and ensure the security of troops as well as safe return of civilians to their homes, all decisions taken under the Moscow deal are being implemented with utmost care, according to Anadolu Agency.

According to the local monitor, Russian and regime airstrikes have targeted 20 refugee shelters, 88 educational facilities, nine Civil Defense centers, 32 health centers, eight ambulances, 14 furnaces and a bakery, 31 worship, and 23 other facilities such as water and power plants.