The Turkish army has launched an attack against regime outpost near the town of Saraqeb, killing dozens reports Zaman Al Wasl. 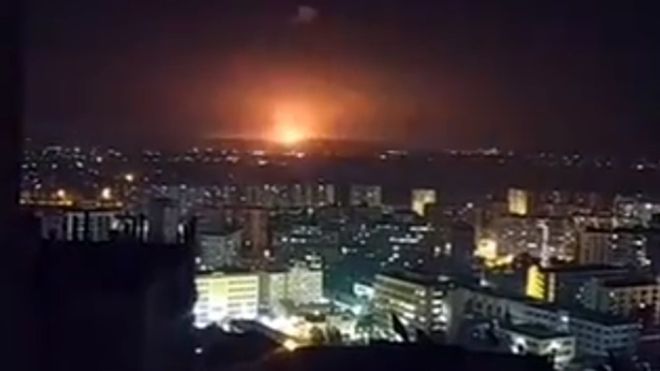 Turkish artillery fire hit regime outposts near the town of Saraqeb late on Wednesday as eyewitnesses confirmed that the Russian-led forces entered the strategic town in northwestern Idleb province.

On Wednesday, Turkey’s President Tayyip Erdogan threatened to drive back Syrian troops in Idleb unless they withdrew by the end of the month, to stem an assault which he said had displaced nearly 1 million people.

Erdogan has criticized Russia, a key backer of Bashar al-Assad’s regime, for failing to enforce peace agreements in the region and called for Moscow to “better understand our sensitivities in Syria”.

“From now we will not turn a blind eye to any step that constitutes the violation of the agreements,” he added.

Eyewitnesses told Reuters that rebel fighters had left and that Assad forces were in control of the town, which lies at the junction of two main roads that Damascus seeks to fully control.

Syrian state-run TV said that the roads were now within firing range of regime forces.

Assad’s campaign to regain Idleb province, the last rebel bastion in a nearly nine-year-long civil war, has sparked a new exodus of thousands of civilians towards the border with Turkey, which backs some insurgent groups fighting Assad.

The renewed fighting is taking place despite a Jan. 12, 2020, ceasefire deal between Turkey and Russia, which back opposing sides of the conflict. Shelling by regime forces killed eight Turkish military personnel on Monday, prompting Turkish forces to strike back.

Erdogan said this week’s clashes amounted to a “new era” in Syria, and that any further attacks would be “responded to in kind”.

“The air and ground elements of the Turkish armed forces will freely move in the Idleb region and if needed will launch an operation,” he said.

Meanwhile, eight humanitarian aid organizations on Wednesday called for an immediate ceasefire in northwestern Syria, where hostilities have displaced half a million people in the past two months.