The female members of the White Helmet have been a crucial part of the rescue group that have reportedly rescued 114,000 lives since 2013 writes Al-Araby Al-Jadeed. 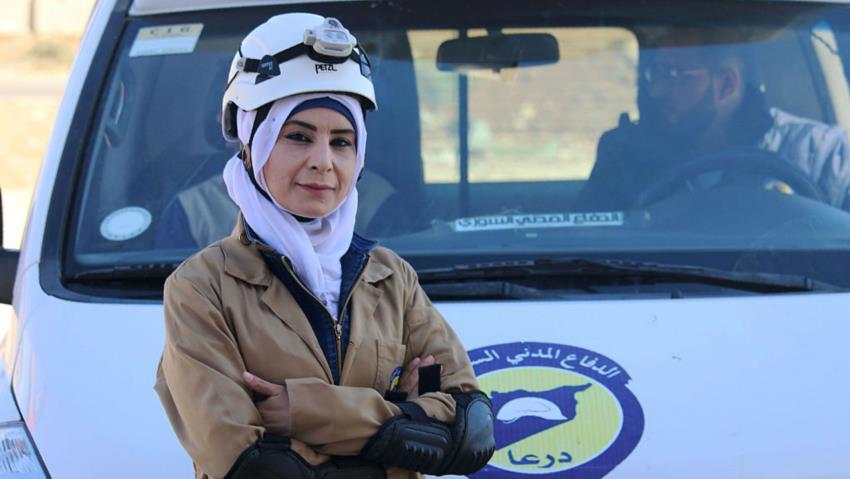 It is often said that conflicts have unsung heroes.

In Syria, these are most certainly local humanitarian aid workers, who literally put their lives on the line to help their people.

These workers are even less visible when they are women, due to a mix of social stereotypes and limitations they face, especially in conservative communities, and because of security threats from those opposed to having women on the humanitarian frontlines.

As we celebrate International Women’s Day this month, it is worth amplifying their voices and shining a light on their work. These women should no longer remain in the shadows; they deserve to have their work and dedication recognised.

The frontlines have many heroes and heroines. One of the better-known ones is the Syria Civil Defence, also known as the White Helmets who have been working inside Syria since 2013, and have reportedly rescued 114,000 lives.

One of the lesser-known facts about them however is their focus on engaging women in their programmes and their own ranks.

The work on the ground

Muzna Dreid, Liaison Officer of the White Helmets based in Canada, spoke to me via Skype at the end of February. She explained their multifaceted civilian work in Syria: “In reality, the White Helmets have a lot of programmes in addition to the heroic videos you have seen before, where bodies are being pulled from the rubble – so-called search and rescue missions.

“These include demining the soil, women’s centres, as well as an app that tracks warplanes. We also work on accountability as we collect and provide soil and genetic samples from attack sites.”

The app that tracks plane movements collects data from Assad’s and Russia’s air bases. It then sends warnings about anticipated bombardments. This helps to instruct residents to evacuate a certain area or look for cover at least.

A recent development in the work of the White Helmets is the increasing involvement of women. In addition to the 31 centres inside Syria that primarily provide services to women and children, especially concerning maternity and reproductive health, they run awareness sessions about non-explosive ordnance and mines. More and more women are joining, and currently there are 2,800 male and 231 female White Helmets.

This is a point of pride for Muzna, who explains: “Last year, we succeeded in changing our internal rules to include a women’s quota on the board, and to ensure that our women’s centres are run exclusively by female directors.” This development is encouraging, as these women also have access to different networks than their male colleagues, can provide medical care and raise awareness.

However, it’s not all plain sailing for these women. “Female White Helmets face particular challenges, because this type of work is seen as a man’s work. It is highly dangerous and stressful, so it is not seen as suitable for women,” Muzna concedes.

Nonetheless, the women persist and carry out their activities. When there are emergencies they participate in search and rescue missions, but also more generally conduct awareness raising activities.

The largest part of the work is being conducted in Idlib. The last area of Syria not controlled by the Assad regime has been under constant aerial bombardment for weeks now by regime and Russian forces. Evidently, the goal is total submission, forcing anyone standing against the Assad regime to surrender and denounce their opposition.

“The crisis in Syria has significantly escalated over the past few months. According to the UN, 4.5 million people are under attack in Idlib. This is the biggest humanitarian crisis in modern history.” Muzna clarifies. Nearly all medical facilities in Idlib are already destroyed; those that still operate are completely overwhelmed. At the moment, no end to this intense military campaign is in sight.

According to Muzna, “all of Syria is important to us, but Idlib is receiving the most attention because it is under intense bombardment and there are four million civilians trapped there. But we also operate in the countryside of Hama, Latakia, Aleppo, Afrin and Manbij. So it is not only about Idlib, but the demand is very high for search and rescue missions due to the bombardment.”

The battle rages on, not only on the ground, but also online. The immense media exposure of the White Helmets came with an ugly price tag. A massive smear campaign against their work has been raging for years.

“Killing the Truth”, a concise and insightful report by The Syria Campaign, gives an impressive account into this disinformation effort. It involves Russian state-backed propaganda, an army of trolls, and Assad apologists doubling as bloggers.

They perpetuate the two-fold accusation that the White Helmets are connected to al-Qaeda, and stage their attacks in order to smear the Assad regime and the Russian army. Even though those accusations are completely absurd, the campaign has contributed to a feeling that many outside of Syria share: “We cannot know what is true anymore.”

Such consternation is a shocking and sad outcome of the propaganda machine, because it ignores the suffering of civilians in Syria. Alongside the physical attacks, disinformation campaigns actually cost human lives on the ground. They hinder valuable humanitarian work by blocking funds or forcing organisations like the White Helmets to constantly defend themselves, instead of carrying out their work.

The battle for truth rages on, as the report from The Syria Campaign further testifies: “This negative coverage threatens to have a significant impact on the work of the White Helmets and their ability to save lives and expose ongoing war crimes. False accusations reverberate beyond Twitter threads threatening to legitimise attacks on the ground in Syria.”

As over 200 volunteers have already died, many lives have been lost in this dangerous line of work. Often times, this is due to the “double tap” attacks by the Syrian and Russian forces. Such despicable tactics have been well documented and are a crime against humanity.

On 11 November 2019, the White Helmets suffered another loss: James Le Mesurier fell from a balcony close to his home in Istanbul. A few days before, the official Twitter account of the Russian foreign ministry had denounced him for being a spy. As such, the incident takes place in the wider battle for truth in Syria.

Le Mesurier founded Mayday Rescue, which trained White Helmet volunteers to rescue victims of bomb attacks. He was a former military professional with the British army and had valuable knowledge for such rescue missions.

Looking beyond Idlib towards the whole country, Muzna has a clear message: “We are ready to work anywhere in Syria, also in regime controlled areas. They refuse for political reasons, but we are always ready to serve Syrians no matter where they live.”

This statement is astonishing given that Assad considers the White Helmets terrorists that must be defeated by force. It speaks to the commitment the White Helmets have to helping civilians anywhere in the country, for example by demining soil that is contaminated with all kinds of weaponry.

This work is ever more urgent because the Russian government has declared Syria the testing ground for their newest military acquisitions. The Russian defence minister proudly declared that over 200 weapons have been tested in Syria. It will require years of work to make the soil safe again.

Against this backdrop, the legacy of James Le Mesurier extends further than the people who knew him. It lives on in people like Muzna and the female White Helmets on the ground in Syria, who save lives and help their communities, despite all threats they face.

When a bomb falls in Syria, no fire truck or ambulance will come. The only people who will come and rescue civilians are these volunteers, men and women, and this is the simple truth in this horrible war.

In the words of Muzna: “Our work explains our position and our perspective, it speaks for itself. The situation is so desperate inside Syria, we don’t have time to explain ourselves all the time, we just keep on working.”

Anna Fleischer is programme coordinator at the Heinrich Böll Foundation’s Beirut office. She is particularly interested in gender justice and grass-roots movements, with a special focus on Syria.