Young women in Lattakia are living in fear of the regime’s shabiha and what they might do if they refuse their marriage proposals writes Brocar Press. 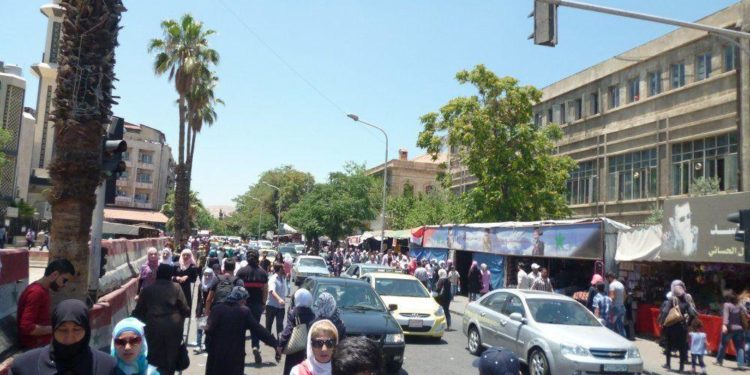 Umm Ahmed recently left her city of Lattakia, which is under regime control, and headed towards Turkey accompanied by her three daughters and small son, who is no older than five years old, as well as her husband. But their reasons for leaving their home and work in Lattakia were different from other families, who have left out of fear or their children fleeing military service in the regime forces. Instead, it was out of fear for her daughters, who were asked for their hand in marriage number of times to marry by the armed regime loyalist fighters who run the city and are known as “shabiha.”

The family decided to leave the city and head to Turkey in hope of saving their daughters and to live in security far away from these criminals, according to what Umm Ahmed told Brocar Press. She described the situation inside the city as a jungle, with no one able to deliver them justice and no state for them to submit a complaint to if any one of their daughters was put under pressure—or in the event that they refused to marry the shabiha, who could take revenge by killing or arresting them. Therefore they preferred to leave the city to preserve their family, despite the fact that they had to leave a large number of their possessions behind.

Describing the situation of residents in regime-controlled areas, she said: “Life is full of fear, expecting a disaster to befall the family, especially given that the girls are of marriageable age. There are many stories going around about kidnappings and killings and there is no voice to be raised above the voice of weapons, and no one, no matter what strength he has, dares to refuse one of the shabiha.”

The situation for the young woman Samar does not differ greatly from that of Umm Ahmed’s children. But luck may have played a role in her story. She lives in the city with her mother, father and sister, while her male siblings left to areas under opposition control with the beginning of the revolution, with one of them defecting from the regime army and joining the Free Syrian Army.

She received a proposal from a leader of a brigade in the National Defense in Lattakia, and after she refused to marry him, he returned once more and told her father that he knew where his sons were and that he was covering up the matter out of fear for their safety and because he wanted to marry his daughters, and then gave them a deadline of one month to think about it, or we would inform on them.

The deadline had hardly passed until they heard news that he had died in battle. Samar said that she had lived her days in fear and thought many times about accepting it out of fear for her father, who refused to leave their home. She also couldn’t inform her brothers about the situation out of fear that their father would be forced to leave the city where he was born and wouldn’t be able to live far from it. She said that many women live in similar situations and that many are forced to get married as there is nothing forcing any young man with a weapon to stay away from a woman he wants to marry, even if she rejects him multiple times.

She continued that media always talks about the murders which happen for these reasons, the latest of which was in the city of Tartous, when a young man shot at his former fiancee and sister and killed them without mercy. The situation also appears to be more difficult in Lattakia city because of the religious differences between those who have weapons who are regime loyalists—who are mostly Alawite—and the women they want to marry, who are from the city’s Sunni districts.

There are no solutions to change this situation except to dissolve these militias and put an end to the regime’s shabiha, by disarming them and preventing them from threatening and putting pressure on people by force of arms, which have given them power. This is the opposite of what has happened in the city, where the regime has worked to increase the number of armed men and given them major benefits for fighting against rebel groups in areas outside their control without concern for the situation of the cities and families that they have control over—and without any accountability for the wrongs that are committed, even if the victims file a complaint against them. This comprises a major factor of fear and pushes many families to leave their homes and to flee the province for one reason, which is their children. But those who stay live in difficult conditions that are reflected in the smallest aspects of life as well as at the mercy of the shabiha.