The shelling of Damascus by opposition militants should not be seen as a justification for Assad's leveling of Eastern Ghouta, Wael Sawah writes 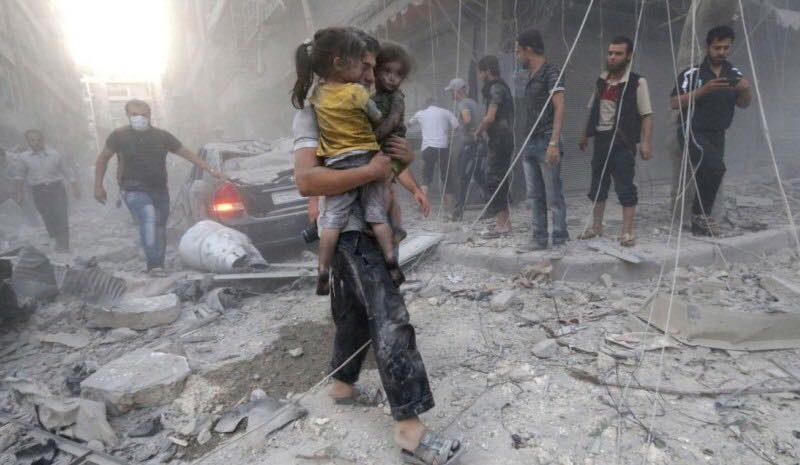 “The entire town has been bombed: missile launchers, artillery and mortars. The ‘Yaman’ hospitals, the Douma Hospital and the Red Crescent have been blasted. Terror, terror. Plenty of injured and no place to help them,” went the Facebook status of one woman, quoting a doctor from the Eastern Ghouta.

A pro-regime intellectual responded to the post saying: “If there is communication between you and them, why don’t you tell the women who launch mortars that the shelling did not affect the checkpoint in the suburb or the military hospital, but the result was the killing of children. There was a child in Al-Mujtahid Hospital who did not reach his first year. The shelling was followed by more shelling that hit the Armenian church in Bab Sharqi, which only exposes their lies that they only target military positions.”

The second poster is attempting to equate the regime’s bombardment of civilians in the Eastern Ghouta with the mortars that are launched from the Ghouta onto the Damascus suburbs. In this view, if the regime is savage, the revolution must be portrayed in the same way. The Assad regime can be despotic, is the argument, but it is superseded by the most despotic forms of backwardness in the practices of factions in many of the areas it controls. The regime has arrested, killed and destroyed people and families, but the opposition has done the same.

Can we compare the regime shelling on the Ghouta to the rebel shelling of Damascus? At least 260 people were killed and 500 injured in the Eastern Ghouta between Monday morning and Tuesday evening, according to the Syrian American Medical Society. In response, according to Syria’s official channel SANA, less than a handful of victims were killed in Damascus over the past week. Among this handful of victims is a friend of mine. In my view, a war crime is a war crime regardless of its volume. Indiscriminate shelling is a war crime, whether one civilian is killed or one thousand. I can say that openly. Can President Bashar al-Assad’s supporters say the same?

Assad and the Russians are targeting civilians, homes, hospitals, doctors, first aid responders and orphanages – these are civilians.

A close friend of mine wrote the following post: “While I strongly condemn the shelling of civilians and lack of discrimination among the victims, the repeated comparisons between the burning and destruction of the Ghouta with barrel bombs, missile launchers and fighter jets, on the one hand, and mortars on Damascus, on the other hand, remind me of Israeli settlers' claims over shelling from Gaza.”