Since the start of the uprising in 2011, Alice Mufarrej has worked to reduce violence and promote the voice of women in Syria. 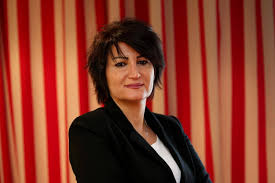 To the right of Nasr al-Hariri, a woman with short black hair leads the photos of the press conferences in Geneva. Although she is not that well known, she is the Vice President of the opposition delegation in Geneva — Alice Mufarrej. Alice is a special case in the Syrian revolution. While she supported the peaceful revolt with all her strength, she stopped when the revolution was militarized, and warned against religious extremism.

Alice Mufarrej was born in Suweida in 1971. She studied Arabic and obtained a degree from Damascus University. She worked as an Arabic teacher in a secondary school, and was an activist in civil society in the majority Druze province of Suweida, focusing particularly in the fields of female empowerment, the environment and cultural cooperation. She joined the Communist Labor Party, which is a small leftist party run by Abdelaziz al-Khair, who was kidnapped by the regime in September 2012. She was selected as a member of the party leadership. Her name became prominent in 2004, when she participated in the demonstrations in support of the Kurdish uprising that year.

Alice Mufarrej participated in peaceful demonstrations at the start of the revolution in 2011, and called for the downfall of the regime, as well as civil sit-ins. She organized them with the coordination councils, and focused on women’s actions and participated in establishing the “Syrian Women of the Revolution” coalition to work on mobilizing protests in the capital as well as assisting displaced people, the disabled, and treating wounded protesters. It did not last long because most were arrested. Her activities led to her being arrested twice: the first time on Jul. 20, 2011, following her participation in peaceful demonstrations in Damascus. She and six other activists were beaten with fists, feet and electric rods by members of the loyalist Baathist militia, which also openly sexually harassed her before turning her over to the police.

When she got out of prison, she was fired from her work and her home was confiscated. Mufarrej remained active in aid work and awareness campaigns and continued to peacefully protest, and then was arrested again at the end of 2013 by the Department of Migration and Passports for 40 days, before being released as part of a prisoner exchange with the opposition. After that she traveled to Lebanon and then moved to Germany with her family, which allowed her greater participation in political life.

When Alice was arrested the second time she was working as a teacher in the Jaramana district of Damascus. She was working to defend women’s rights and was one of the women who established a group called “Syrian Women for a Citizens’ State”, which worked from the beginning of the revolution to create economic opportunities for women, promote peace and limit the conflicts between armed groups on a local level.

According to her account, “Prisoners were being tortured to death on a daily basis. I felt lucky to be alive. We were isolated from the outside world and could not see a lawyer. For more than a month, I was stuck in a cell with more than 30 women arrested on various charges — either due to their aid work in besieged areas, or because of their personal or family connections with members of the opposition, or because of a false security report. The cell was a little less than five square meters, and it was dark and cold and airless. Torture was routine.” Afterwards, Alice was able to leave during a prisoner exchange between the regime and opposition.

For a Peaceful Revolution

After the revolution began to become militarized, Alice worked with the United Nations on peace-building and conflict resolution workshops, and obtained a training certificate. She worked to connect areas under regime control and rebel-held areas to prevent chaotic escalations and to free kidnapped people on both sides and to work in Ghouta, Homs, and Daraa. Her work was related to civil peace, a variety of aid work and economically empowering the wives of members of the Free Syrian Army, preventing early marriage, forcible conscription and providing training on gender principles.

Alice also participated in establishing a number of civil associations to continue peaceful action and to work on the day after the fall of the regime, such as the Secular Youth Association to ensure Syrian plurality and keep the revolution in line with its demands, and the Syrian Women’s Organization, as well as the Syrian Women’s Network, and the Women’s Lobby, as well as establishing the Syrian Women for Peace and Democracy initiative, sponsored by the United Nations, to push for a political settlement based on the Geneva declaration, to connect the local, national and international processes and to support women in attaining decision-making positions on the legal basis of the Security Council Resolution 1325.

Alice and her colleagues called on the former UN envoy Lakhdar Brahimi to have a women’s delegation at the negotiating table on an independent basis at the Geneva 2 negotiations. Women were represented at the conference at a rate of less than 30 percent, but the initiative produced two in the negotiating delegation at Geneva 3: Alice and Basma al-Qadmani. A Civil Society Chamber was established and a Women’s Consultative Council for Staffan de Mistura. Alice refused to stereotype the role of women in Syria only as peacemakers and builders of tolerance, and insisted that women should be partners in a just political solution, linking the political transition with the issue of accountability and building a sustainable peace, and as a force for the democratization process.

Alice occupies a leadership position in the National Coordination Council. She participated with her colleagues Basma al-Qadmani, Mia Rahbi, Mariam Jalabi, Jumana Saif, and Wajdan Nassif on establishing the Women’s Political Movement, to pressure for women’s representation in the Negotiations Committee for the Riyadh 2 conference, and to work on negotiations issues and the future constitution from a gender viewpoint and to build political action to raise Syrian women’s voices.

In 2012, Alice participated in the establishment of the Democratic Forum and was a member of the political committee. She also participated in setting up the Cairo 2 conference but at the last moment, she did not attend.

She became a member of the Geneva 3 delegation and then was appointed as a Vice President of the Geneva 4 delegation, as a result of her activity in the National Coordination Council. She was responsible for the issue of prisoners and the forcibly disappeared during 2016.

She was appointed Vice President of the negotiations delegation in February 2012, and participated in the Riyadh 2 conference as a member in the Syrian Negotiations Committee.

Alice Mufarrej has not been among the opposition figures facing accusations relating to integrity, while her opposition to Islamist movements is well-known.

Alice now works in coordination with the European Union to support women’s political empowerment to ensure their representation in local councils and the importance of their participation in security matters on the ground, in order to achieve a safe and neutral environment in all local councils and agencies. She is also working to coordinate with international organizations at the official state level to show the legal aspect of the prisoner’s issue and not to politicize it as a blackmail card and to prevent violations in official and secret prisons.