The secretary of the Kurdish Democratic Progressive Party in Syria, Abdulhamid Darwish, is regarded as one of the last remaining of the original Kurdish political activists 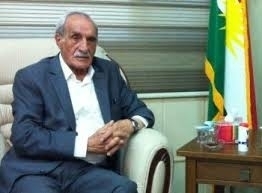 Darwish's political activity began in the mid-1950’s, when he contributed to the establishment of the Kurdish Democratic Party, along with the so-called “Founding Fathers”, Osman Sabri, Nouraddine Zaza and Rashid Hamo in 1957.

Since then, Darwish has become one of the most important figures in the Kurdish National Council (KNC) and its candidate to represent the Kurds at the upcoming Geneva II conference.

Darwish was born to a family of agricultural land-owners in 1936 in the village of al-Karamani, near al-Derbasieh, in the northeast of Syria.
He obtained a law degree from Damascus University in the 1950’s, preparing him for a political career that can be divided into three distinct stages.

From the mid-1950s to the mid-1960s, Darwish was an example of the politically active Kurdish youth, joining the central committee of the Kurdish Democratic Party in Syria. He became politically active, moving between different Kurdish political groups in the regions of Efreen, the Jazeera and Damascus. At this stage in his career, Darwish tended towards the modernist national Kurdish consciousness movement represented by Dr. Nouraddine Zaza, as opposed to the traditional conservative Kurdish nationalist movement represented by Osman Sabri. That conflict eventually led to the division of the party in the 1960s.

The second stage of Darwish’s political life began in the mid-1960s and lasted to 2004, when, in March, the Kurdish uprising in Syria began. In the 1960s the central Kurdish party was divided into a number of organizations, but three remained the most prominent with a sustained political and public regulatory presence.

The first, the Kurdish Democratic Party of Syria, was a leftist national organization that concealed a Kurdish “populist” under leftist Marxist rhetoric and that sought to rival the Syrian communist party in its Kurdish base. The second, the National Kurdish Front, led by Osman Sabri and the Kurdish politician Salah Badreddine, was a traditional Kurdish national organization close to the Barazani family leadership in the area. The third organization was called the Kurdish Democratic Progressive Party that Darwish headed.

His party took a medial position between the other two organizations and presented dissertations that contrasted strongly with the populist leftist Kurdish rhetoric and the traditionalist and nationalist movements.

The political expressions presented by Darwish and the party were later entrenched through the alliance with the Kurdistan National Union, under the leadership of Jalal Talbani.

Throughout these years, Darwish managed to strike a balance in the Kurdish-Syrian political field; seriously exploring open confrontation with tyrannical Syrian regime, while also spreading outwards across a narrow population strip in the north of the country that was difficult to break.

Meanwhile, Darwish publicly insisted on solving the Kurdish issue in the country through soft political pressure on the Syrian regime. He was elected a member in the Syrian parliament in the early 1990’s.

The third stage in Darwish’s was characterized by the outbreak of the Kurdish uprising in Syria in the spring of 2004, when the political Kurdish body moved into Syrian opposition publicly.

Darwish and his party were one of the most important channels between the Syrian national political opposition and the Kurdish-Syrian parties. He contributed in founding Damascus Declaration of opposition forces late in 2005 and later became the Secretary General of the movement by the same name.

When the Syrian revolution erupted at the Spring of 2011, Darwish demanded holding a Syrian nationally inclusive conference planning for the transition of Syria to democracy.

He refused, along with a number of leaders of the Kurdish parties, to meet alone with President Bashar Assad, insisting that the meeting should be extended to include the whole Syrian political spectrum.

Darwish and the rest of the Kurdish parties established the Kurdish-Syrian National Council in the summer of 2012, expressing the ambitions and the attitudes of the Kurdish-Syrians as separate from the events and transformations of the Syrian issue as a whole. He was elected to represent the KNC at peace talks in Geneva this year.

Darwish is considered a gentle character, who presents his closeness to his public base on all occasions. He is also regarded as an acceptable character across all Syrian national platforms due to his repeated reflection of the Syrian national mood that prevailed in the country during the Ottoman empire and before independence.