The President of Turkey has ramped up tensions as he laid out Turkish plans for northern Syria reports Alsouria Net. 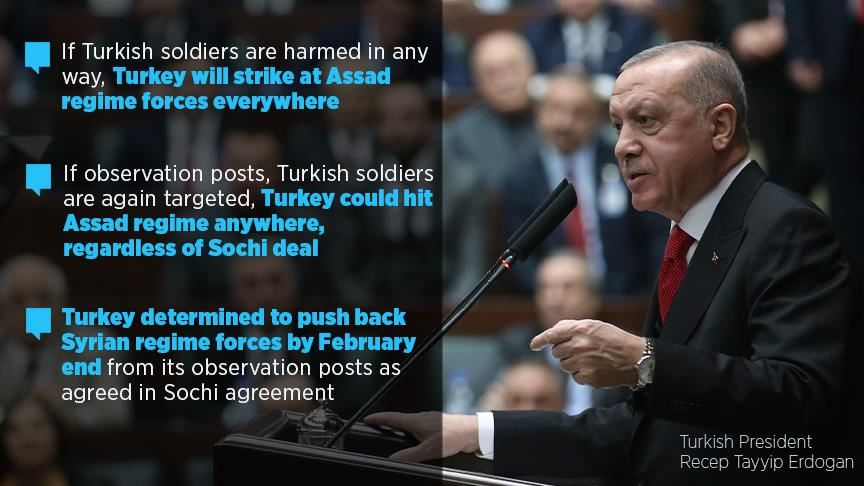 Turkish President Recep Tayyip Erdogan announced the steps his country will take in Idleb in a speech to the Justice and Development Party’s parliamentary bloc on Wednesday, using sharp rhetoric against the Assad regime.

Erdogan announced that his country was ready to torpedo all agreements concluded on Idleb (Sochi, de-escalation), if Turkish soldiers in Idleb were exposed to “the slightest harm,“ adding that the regime planes bombing civilians in Idleb “will not be able to move freely as they did before.”

The Turkish president added that his country would mobilize its air and ground forces and bomb Assad’s forces, even in areas not covered by the “de-escalation” agreement, stressing that Turkey was determined to remove the regime from the areas it recently seized in Idleb up to the end of February.

He continued: “Based on the Adana agreement (concluded with the Assad regime), I announce from this platform that we will strike regime forces directly if our forces are exposed to any harm.”

On Tuesday, Erdogan announced a series of new measures that his country would take in Idleb, in response to Assad’s strikes on Turkish soldiers, which killed 14 over the past few days.

In conjunction with Erdogan’s speech, the Kremlin announced in a statement that the two sides had agreed on the importance of implementing joint agreements regarding Syria. At the same time, Erdogan announced during his speech that his country would torpedo all agreements if its soldiers were exposed to the slightest harm.

Recent days have witnessed an unprecedented escalation between Turkey and the Assad regime, with the Turkish Ministry of Defense announcing that 51 members of the Assad forces had been killed in Idleb and two tanks destroyed in response to the targeting of Turkish soldiers.

The Turkish Ministry of Defense used terms it usually uses in its military operations against Kurdish fighters in Syria and Iraq (“neutralization” “seizure”), which indicates that direct confrontations and fighting with Assad’s forces in Idleb could come soon.