A statement by 18 Syrian organizations to the Syrian negotiation parties, UN and the ISSG 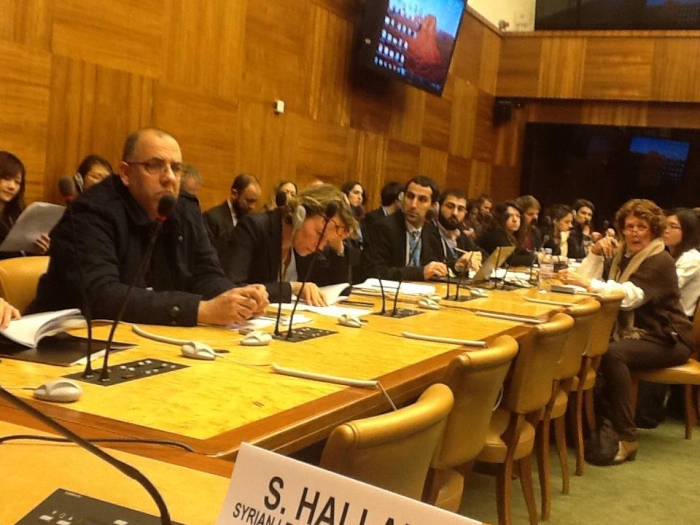 The Syria negotiation parties, the United Nations Special Envoy to Syria Staffan De Mistura and the International Syria Support Group (ISSG) should adopt five key demands related to the transitional period in Syria if they want to establish lasting peace and stability, said a group of 18 Syrian organizations working on transitional justice, accountability, and the documentation of violations in Syria.

The group outlined their key demands in a panel held at the UN Palace in Geneva, sponsored by the Federal Department of Foreign Affairs (FDFA) of Switzerland.

These demands include: (1) access by independent monitors to all prison and detention facilities in Syria and the release of individuals arbitrarily detained on political, ideological, religious, or sectarian grounds; (2) the establishment of a national and independent fact-finding commission with Syrian and international members to document serious violations of international law committed by all parties to the conflict; (3) replacement of the heads of the Syrian security apparatuses and launching of a comprehensive plan for security sector reform; (4) the establishment of clear mechanisms to facilitate the voluntary return of refugees and displaced persons and to restore their property and (5) the establishment of a national reparations program for both individual and collective reparations to all civilians affected by the conflict.

These demands constitute the bare minimum objective and feasible demands of Syrians, the groups said.

“These demands are crucial for a lasting and durable peace; without addressing these issues, Syria might crumble during the transitional period and fall into a cycle of violence again,” said a spokesperson of the 18 organizations. “Mr. De Mistura needs to consider these points when returning to negotiations on Feb 25”, the spokesperson added.

The full statement issued by the 18 Syrian organizations can be found below:

To: The Syrian negotiating parties

We, the signatories to this letter, are Syrian organizations working on human rights documentation, accountability, and transitional justice in Syria. We reiterate our commitment to the principles of justice, comprehensive accountability, and absolute support for all victims in Syria and their rightful demands for remedy and justice. As such, we propose the following minimum demands — fully aware that the demands of the Syrian people for freedom and justice go beyond what we set out in this letter — which we believe are necessary and cannot be overlooked in the transition period or in any deal that aims to establish peace and stability in Syria. These demands are addressed to the Syrian negotiating parties, to the special UN envoy Staffan de Mistura and his team, and to the states and institutions within the ISSG sponsoring the negotiating process:

a. Allow immediate and unconditional access for any independent, impartial, and neutral organization that enjoys international credibility to inspect and visit all prisons and detention facilities in Syria, including informal centers run by Syrian government security services or armed opposition factions; and, issue a full and official list of prisoners’ names to determine the persons still held in custody by all parties to the conflict, in preparation for creating a catalog of missing persons who do not appear on any prisoner list.

b. The parties to the conflict shall release all individuals arbitrarily detained on political, ideological, religious or sectarian grounds within six months after the start of the peace negotiations. This will act as an initial confidence-building measure to comprehensively resolving the issue of detainees in Syria.

The transition body formed as a result of the negotiations shall establish a national independent commission of inquiry, composed of a combination of respected international figures and independent, credible Syrian figures who represent all political, ethnic, religious, and sectarian backgrounds in Syria but who were not involved in either the fighting or the political process. The commission shall be sponsored by the United Nations, enjoy the support of the states and stakeholders sponsoring the negotiations, and be entrusted with the task of documenting war crimes, serious violations of international human rights law, and crimes against humanity committed by all parties to the conflict in Syria following the 2011 uprising. The commission shall be composed of committees with the power to make recommendations on issues such as the establishment of a national mechanism for opening mass graves and exhuming and identifying bodies and delivering them to families. The Commission shall be granted full access to all regions of Syria within the control of the negotiating parties, as well as access to examine all official records and interview witnesses and security officials. The Committee shall submit an initial report to the Syrian people and the United Nations within the first year of the signing of the peace agreement in Syria.

Obligate the negotiating parties, under the auspices and with the support of the states and stakeholders sponsoring the negotiations, to make fundamental and urgent changes in the leadership of the Syrian security services, including replacing the leaders and key personnel of Syria’s security forces and provincial and municipal security branches. These replacements shall be made within six months after the signing of the peace agreement. The parties shall not consider as replacements those who participated in international criminal law or gross human rights violations during the conflict.

The replacement of security leaders shall be the initial step in a comprehensive plan for institutional reform, which the parties will develop within the first 18 months after signing the peace agreement. The plan shall include judicial reforms, security apparatus reforms and restructuring, and a program for disarmament and reintegration of all militias in areas under the control of the negotiating parties.

Establish and oversee clear mechanisms to facilitate the return of refugees and displaced persons and to restore their property or the value thereof, including damaged real estate and buildings, even if the owners left Syria or delay their return. This includes properties located in areas which the government and the opposition cooperated to evacuate populations on sectarian or ethnic bases. This mechanism shall give special consideration to the most vulnerable groups in Syrian society, such as women and children. This mechanism shall be placed under the clear supervision of the United Nations or an ad hoc committee that reports to the United Nations.

Create a national reparations program for both individual and collective reparations to all civilians affected by the conflict. Reparations shall include non-monetary assistance for individuals located throughout Syria, such as necessary medical and psychological support for victims of military operations and psychological support and rehabilitation for children and people with special needs, with a particular focus on sexual violence and abuses based on gender which women and girls have suffered. The United Nations, the sponsoring states and stakeholders, and the negotiating parties shall commit to providing financial resources as well as political cover and security protection for the program.

We are ready to meet with you through our representatives at any time and we invite you to discuss any and all of the aforementioned points in more detail.

Syrian Center for Statistics and Research