President Bashar al-Assad said the Syrian people surprised the world once again with their unprecedented participation in the country’s parliamentary elections. This speech is republished as it appeared in SANA, the Syrian official news agency 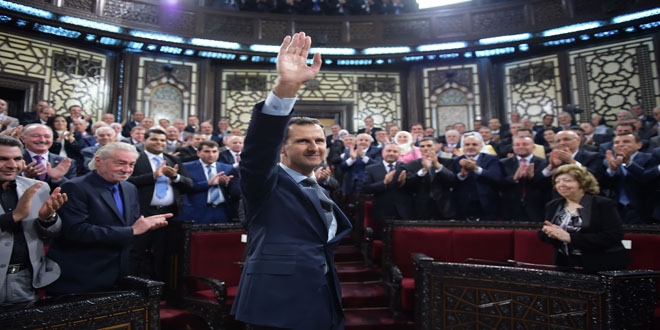 President Bashar al-Assad said the Syrian people surprised the world once again with their unprecedented participation in the People’s Assembly elections, affirming that Syria’s war on terrorism will continue until it is uprooted.

In a speech addressing the People’s Assembly of the 2nd legislative term on Tuesday, the President added that the unprecedented number of voters in the recent parliamentary elections sent a clear message to the world that the greater the pressure gets, the stronger the Syrian people’s commitment to their sovereignty becomes.

He noted that this newly elected Assembly is different from the previous ones in that the voters have elected candidates who have lived the suffering and are thus willing to give, calling on the Assembly members to follow a certain approach and guide for the next stage which is working for the other and not one’s self just like the martyrs, the wounded and all those who made sacrifices have done.

President al-Assad said it is no longer secret that the essence of the political process of the countries supporting terrorism is directed at hitting at the heart of concept of the homeland which is the constitution.

“They believed that the core of their political scheme after their plot of terrorism failed was to hit the constitution, and thus creating chaos,” he added, noting that the scheme was for terrorism to come and fully take over and later be given the quality of moderation.

The President went on saying that the countries supporting terrorism had to greatly resort to sectarian terms in order for them to consolidate their schemes, as “the sectarian regime turns the people of a homeland into adversaries, and that’s when the imperialist states put themselves forward as rulers of the groups inside the homeland.”

“Unity starts not with geography but with the unity of the citizens,” the President said.

He stressed that having principles is necessary in any talks as they constitute a reference for the process of negotiating, noting that since the beginning of Geneva 3 talks, the delegation of the Syrian Arab Republic proposed a paper of principles that forms a basis for the talks.

The President said there have been no real talks until this moment and the paper of principles has not been answered to, adding that the questions put to the Republic delegation in Geneva were booby-trapped, but “our answers were decisive and we didn’t allow them to pass any terms.”

“When they failed to achieve what they wanted, their response was an open declaration of supporting terrorism and withdrawing from the cessation of hostilities agreement,” said the President, adding that “this was what we saw of targeting civilians and hospitals in Aleppo.”

He noted that the “fascist” regime of Erdogan was focusing on Aleppo because it is the last hope for his Muslim Brotherhood project.

“Aleppo will be the grave where all the dreams and hopes of that butcher will be buried,” said President al-Assad.

He stressed that sedition in Syria is not sleeping but rather dead, and that the terrorist bombings will not tear the Syrians apart, adding that the Syrians are “brothers in life and martyrdom”.

He saluted the Syrian people “everywhere in Syria as they are defying death and terrorism and the sedition projects with them being committed to the will to live and remain steadfast.”

The President said “the terrorism of economy and the terrorism of bombs, massacres and shells are the same,” adding that “That’s why I affirm to you that our war against terrorism will continue, not because we like wars-as it was they who waged wars against us-but because the bloodshed won’t come to an end until we root out terrorism wherever it is and regardless of whatever masks it wears on.”

“Just like we liberated Palmyra and many other areas before it, we are going to liberate each and every inch of Syria from their hands because we have no other choice but to win,” he added.

He reiterated that any political process that does not start, continue, coincide and end with fighting against terrorism would be meaningless and fruitless.

President al-Assad renewed his call “for all those who took up arms for any reason to join the reconciliation process” which has recently accelerated after it has been going on for years.

He also saluted the “heroes of Syria within the army, the armed forces and the supporting forces,” saying if it was not for their bravery, Syria wouldn’t have been the one it is.

The President stressed that terrorism will definitely be defeated as long as there are countries like Iran, Russia and China who support the Syrian people, stand by the side of justice and help the oppressed in the face of the oppressor.

He expressed thanks to these countries and appreciation for their firm position with Syria, saying “these are countries that respect their principles and always seek to support the people’s right to choose their destiny.”

“If restoring security to Syria, achieving victory over terrorism and bringing back the homeland and reconstructing it are that price which makes the pure blood of the martyrs don’t go in vain, then fighting the harmful phenomena of corruption, favoritism and break of the law are the second part of that price,” the President said.

He added that “the price asked from us is to preserve the constitution and the institutions and develop them and preserve the rule of law and consolidate justice and equality of opportunities.”