Fires in Masyaf, the Foreign Ministry in Syria condemns statements by the west and a migration wave in Daraa. Catch up on everything that happened over the weekend. 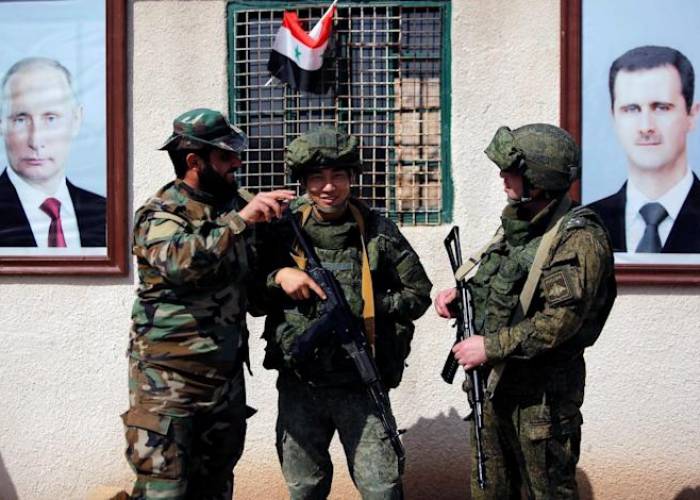 Russian warplanes conducted five airstrikes on the Jabal al-Zawiya region in the northern Idleb province, and the al-Kabbana hilltops east the of Lattakia province, Zaman al-Wasl reporter said Thursday. No casualties were reported. In retaliation, the National Liberation Front hit regime points in the Joreen camp west of Hama province, and other military sites and barracks in the southern countryside of Idleb, using artillery shells and Grad missiles.

On Friday, military vehicles loaded with soldiers and members of the government security branches arrived in the city of Masyaf, in the western countryside of Hama, central Syria. According to North Press, fires broke out in the surrounding villages two days after protests over living conditions broke in the city. Residents accused pro-government members of starting the fires to forests as a punishment to the people. On Thursday, Masyaf witnessed public protests, for the first time in the city,  under the slogan “We want to live”. Residents gathered in the city center calling on the government to secure basic living conditions. An eyewitness indicated that dozens of protesters gathered “after the municipality demolished residential buildings.” “Protesters raised slogans calling on the government to secure water and electricity, in addition to taking care of them like the Alawites of the Syrian coast,” he said.

Due to continuing attacks by the Bashar-al-Assad regime, 80% of the nearly 50,000 civilians living in targeted neighborhoods of Daraa, southwestern Syria, left their homes and migrated to other neighborhoods as peace talks continue. According to the Turkish daily Yeni Safak, migration has continued for the last week in Daraa al-Balad, the adjacent Sad highway, and Daraa camp neighborhoods because of the mortar and artillery attacks by the regime forces on the regime city center. The Reconciliation Center, which represents the people in Daraa, and the regime continued negotiations under the mediation of Russia. During the talks, the regime wanted people living in Daraa al-Balad to surrender all their weapons, search their houses, and surrender some of the armed opposition members. However, people opposed the demands of the regime, which wants to strengthen its control of the besieged neighborhood.

Syria strongly condemns the fabricated accusations being hatched by Israel, the U.S. administration, Britain, and some Western countries, which come in the framework of the systematized targeting against the Islamic Republic of Iran, an official source at the Foreign Ministry said on Saturday. The Source added, according to SANA, that the Syrian Arab Republic, while reiterating its solidarity and support for the Islamic Republic of Iran against those false allegations, is confident that Iran would be able to foil the U.S. and Western schemes that target it. The source stressed that those accusations wouldn’t affect Iran’s patriotic choices and its constructive role in maintaining stability in the region against policies by the West and the Zionist entity to spread chaos and inflame tensions in the region.

“The Syrian Arab Republic condemns the incitement and hypocrisy campaign launched by the British government and the EU about the situation in the Daraa province, which comes within the context of their known hostile policy to Syria and supporting terrorism,” An official source at Foreign and Expatriates Ministry said in a statement to SANA.  The source added that those statements are attempts to ease pressure on terrorists,  stressing that the State has been determined to deal with the situation in the southern region through dialogue and not pushing towards confrontations that could harm innocents, but terrorist groups are still sabotaging any agreement.

The President of the Syrian Opposition Coalition (SOC), Salem al-Meslet, received the Chairman of the Syrian Emergency Task Force, Dr. Hashem al-Mubarak, and Member of the Syrian-American Community, Dr. Ammar Abu Ghudda. According to the SOC media office, the two sides discussed the ongoing escalation and blockade that the people of Daraa are being subjected to at the hands of the Assad regime and Iranian militias, as well as the latest on the ground and political developments in Syria.