The newly promoted Luna al-Shibl has held meetings at the Presidential Palace with new media manager, who will take a role in Bashar al-Assad’s election campaign reports Nedaa Syria. 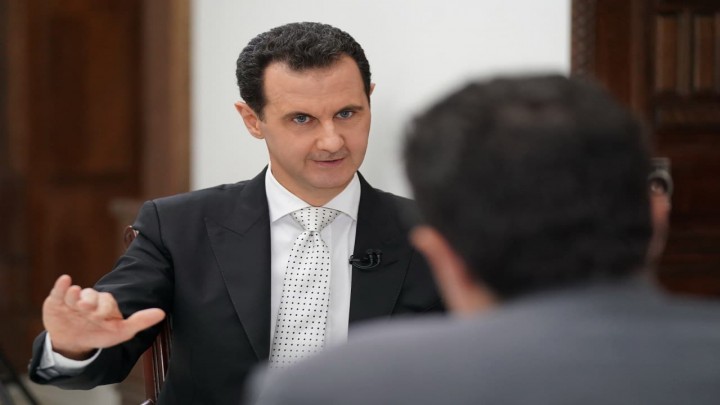 The head of the Syrian regime, Bashar al-Assad, held several meetings at the Presidential Palace in Damascus, only hours after Luna al-Shibl left the General Organization of Radio and Television to start a job at the palace.

A former government advisor who is familiar with the policies of the Assad regime, Ayman Abdel Nour, shared a tweet on his personal Twitter account in which he wrote, “While the government and the leadership of the Ba’ath Party in Mezzeh bury Walid al-Muallem, Bashar al-Assad is preparing to launch his election campaign today by welcoming, for the first time in Syria’s history, new media managers, chosen by Shibl, whose appointment decisions were made yesterday.”

Assad met with all those he promoted yesterday to new positions in the media department of the regime, Abdel Nour confirmed in a statement to Nedaa Syria. Those include Mudhar Ibrahim, Advisor to the Minister of Information for Media Studies; Amjad Issa, General Director of al-Wehda Establishment for Press, Printing, Publishing and Distribution, which publishes the newspapers Tishreen and Al-Thawra; and Mohammad Ali Zahra, Director of Programs in the Organization of Radio and Television.

Abdel Nour said that the meetings focused on launching new television programs on regime media outlets, adding that this comes within the framework of Assad’s efforts to promote himself ahead of the 2021 elections.

According to Abdel Nour, the election campaign will operate along several axes, most notably the media axis, which includes changing all old media faces, which was done yesterday, with more than 20 managers changed, adding that the new managers were granted leeway to cancel programs and produce new ones.

He stressed that the campaign also includes completely changing the Syrian faces abroad, contracting public relations institutions to change the reputation of the Assad regime in the media, as well as changing many ambassadors abroad.

On Tuesday, Prime Minister Hussein Arnous issued several decisions, including the appointment of Amjad Issa and Maher Azzam, Director-General of the General Organization of Radio and Television.

The changes come on the heels of Assad’s decision to appoint Shibl to the position of special advisor, in addition to carrying out the work he assigns to her, while the fate of Bouthaina Shaaban, who has been the political and media advisor to the head of the regime since the era of Hafez al-Assad, has not been addressed. Assad also did not mention whether Shibl would be replacing Shaaban or whether the two would be working together.