Russia and Syria have planned for a conference in Damascus regarding refugees, but the US is insistent that European and Arab countries do not take part writes Asharq Al-Awsat. 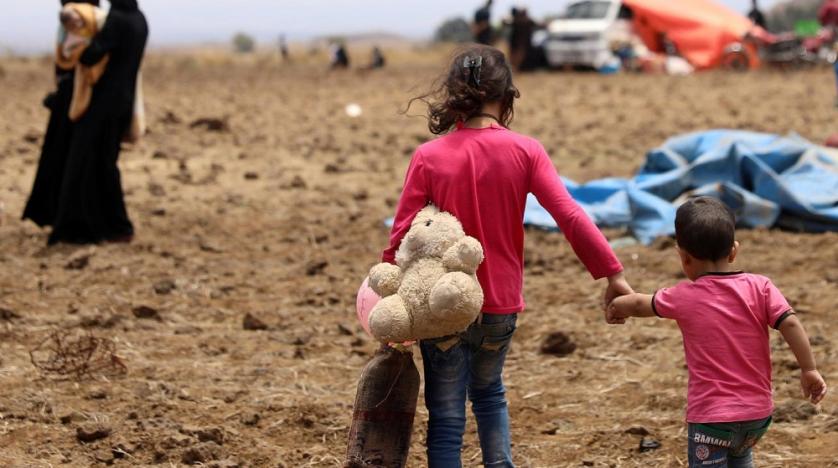 The United States is seeking to underscore the “Russian delusions” over the conference and make sure that it foils Moscow’s plan to end Damascus’ isolation, restore legitimacy to the Syrian government and “transform military achievements into political acceptance.” Moreover, Washington is working on preventing Russia from separating the refugee file and political process from the implementation of UN Security Council Resolution 2254.

Russia first made the invitation to attend the conference from its Hmeimim air base on Syrian soil back in October. Asharq Al-Awsat obtained a copy of the invitation, which said that the settlement of the Syrian crisis and restoring the situation “back to the way it was” are “at the top of any international agenda.”

In this regard, Russia believes that it is important to return all refugees and displaced throughout the world back to their countries. “Seeing as the Syrian crisis has stabilized somewhat and the burdens have increased on countries hosting refugees, the international community is obligated to double its efforts to offer comprehensive support to all Syrians wishing to return home,” read the invitation.

It must also ensure that the necessary living conditions, such as infrastructure and humanitarian support, are provided. “Russia is therefore, proposing holding an international conference in Damascus between November 10 and 14 to discuss the means to support the refugees and displaced throughout the world, as well as address how to restore peace in Syria,” it added.

Russia is hoping that the conference will include roundtable discussions that include providing assistance to the returnees, repairing the social infrastructure, presenting international aid and discussing means to confront the novel coronavirus outbreak.

Damascus appeared displeased with the Russian wording of the invitation, especially when it claimed that the crisis has “stabilized somewhat.” It instead believes that the conflict is still raging amid the regime push to recapture northwestern and northeastern parts of the war-torn country.

Damascus, therefore, released its own invitation to the conference on October 20. The invitation was sent to foreign diplomatic missions and the UN.

Asharq Al-Awsat received a copy of the invitation, which read: “The return of security and stability to large swathes of Syrian territory and the kicking off of reconstruction, specifically in infrastructure, are fundamental steps in providing the necessary conditions for the return of Syrian refugees and displaced to their cities and villages so that they can resume their normal lives.”

It noted that several general amnesty decisions have been released and settlements have been reached with citizens who were forced to illegally leave the country due to the war. The Syrian government is “always prepared to offer all means to support the returning citizens to ensure that they lead a dignified life.”

“The government realizes that the greatest loss in the ongoing war is the departure of Syrians from their nation. This demands that no effort be spared in ensuring their return and participation in reconstruction,” it continued. In order to do discuss these issues further, it said the Syrian government was hosting in Damascus on November 11 and 12 an international conference on the return of refugees.

It said that all precautions against the coronavirus have been taken to ensure the success of the meeting and “deliver a message of hope to Syrians living abroad that their country is waiting for them.”

Soon after the Russian invitation was sent out, a European meeting, with American coordination, was held where participants declared their collective boycott of the conference.

European Union foreign policy chief Josep Borell said: “Everybody wants the refugees to go back home, but these returns must be safe, voluntary and dignified, in line with the parameters defined by the United Nations High Commissioner for Refugees (UNHCR).”

“The conditions inside Syria do not fulfil these minimum requirements. I think everybody agrees on that,” he remarked to the press on October 12. “So, we consider the Russian initiative as premature. We also think that the UNHCR should be fully associated to such initiatives in the future. We are not opposed to exploring the important issue of refugees’ returns, but it has to be on the basis of agreed parameters and in close coordination with the UN.”

On Oct. 22, 2020, the Foreign Ministers of the Small Group on Syria, which includes Saudi Arabia, Egypt, France, Germany, Jordan, the US and Britain, met to stress their continued support of a political resolution of the Syrian crisis according to resolution 2254.

“After almost 10 years of conflict, the people of Syria have suffered deeply. Hundreds of thousands have been killed and millions forcibly displaced. Now facing COVID-19 and continued economic difficulties, we want to highlight again the importance of providing safe and unhindered humanitarian access for all Syrians currently in need of it, including areas where conditions are noticeably deteriorating, as in Idlib province and South Syria,” it said in a statement.

“We would also like to urge the international community to continue supporting Syrian refugees and their hosting countries and communities until Syrians can voluntarily return home in safety, dignity and security. We also oppose forced demographic change and commit to disburse no assistance for any resettlement of Syrian refugees that is not in line with UNHCR standards,” it added.

Washington believes that the Russian initiative has three flaws. First, it was seeking to pressure Europe into joining an “exchange whereby refugees can go back home in return for offering financial assistance to regime-held areas.” Russia is mistaken in believing that Europe can be swayed, when in fact its position on the Syrian conflict is firm.

Second, it believed that it could create a gap between hosting countries and the international community. It is again wrong, because Arab countries do not believe that the conditions are appropriate for the refugees to return home, despite pressure from Moscow and Tehran on Syria’s neighboring countries to that end.

Third, it is banking on a change in Washington in wake of the US presidential election. This is also wrong, because the policy on Syria will not change and the sanctions imposed by the Caesar Act will continue.

“There is only one way to provide the necessary conditions for the return of refugees and that is the implementation of a real political solution, implementation of resolution 2254 and change in the regime’s behavior towards its people,” he stressed.

Russia has countered Washington’s push against the Damascus conference. It dispatched Alexander Lavrentiev, President Vladimir Putin’s special envoy for Syria, to Amman, Beirut and Damascus for diplomatic talks on attending the conference.

The envoy briefed Syrian president Bashar Assad on his discussions last week. The two sides discussed efforts to ensure the conference achieves positive results towards “alleviating the suffering of Syrian refugees and allowing them to return to their homeland and their normal life,” particularly after restoring stability and security in most of Syria, according to the Syrian state news agency SANA.

Both sides were in agreement on holding the conference away from politics, accusing some western countries of “abusing this file for political gain, thereby prolonging the suffering of the refugees and preventing them from returning home.”

Lavrentiev’s tour did not include Turkey, which is host to the largest number of Syrian refugees. It expressed its “disappointment” that the conference was being arranged without it. Close Damascus ally, Tehran, predictably voiced its support for the conference and “advised” Beirut to do the same.

According to the UNHCR, some 5.6 million Syrians have sought refuge in Turkey, Lebanon, Iraq, Jordan and Egypt. Turkey alone hosts some 3.5 million, Lebanon 952,000 and Jordan 673,000. Some 7 million Syrians are displaced in their own country.