Bashar al-Jaafari has rejected the claims of some western countries, regarding the chemical file in Syria writes SANA;. 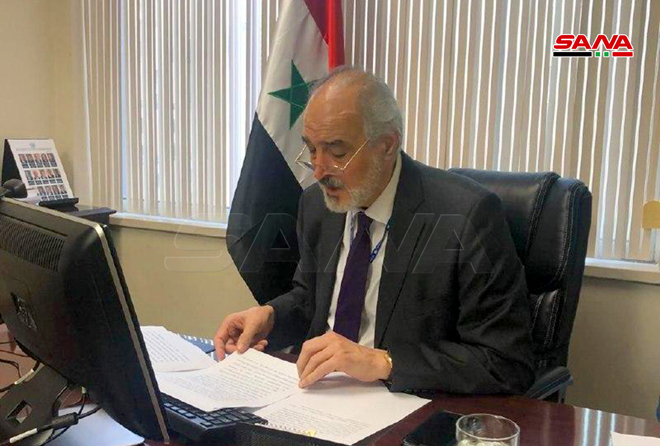 Syria’s Permanent Representative to the UN, Bashar al-Jaafari, has said that representatives of some Western states at the Security Council are intentional trying to distort scientific facts and to fabricate lies regarding the chemical file in Syria. He underlined the necessity of closing this file completely, because Syria has fulfilled its obligations since its accession to the Chemical Weapons Convention and that Syria has destroyed all of its stockpile since 2014.

Jaafari’s remarks came during an informal meeting of the Security Council on the chemical file in Syria held last night via video, at the invitation of the delegations of Russia and China.

He pointed to the serious violations and gross defects that overshadowed the work of the United Nations Office for Disarmament Affairs (UNODA) and the Organization for the Prohibition of Chemical Weapons (OPCW).

Jaafari reiterated Syria’s condemnation of the pressure exerted by the governments of hostile Western countries on the representatives of the United Nations and the OPCW, with the aim of politicizing the chemical file in Syria and giving priority to false claims over facts and technical issues.

He noted that representatives of some Western countries at the Security Council depend on lies and intend to distort scientific facts about the chemical file in Syria.

Meanwhile, the Russian Ministry of Defense has affirmed that Jabhat al-Nusra terrorists are plotting to stage fake chemical attacks against civilians in Idleb’s southern countryside and blame the Syrian army.

Gen. Alexander Grinkevich, Deputy Chief of the Ministry’s Coordination Center in Hemeimeem, was quoted by TASS as saying on Monday that, “terrorists in Idleb are planning for staging a false flag chemical attack against the civilian population in the de-escalation zone in Idleb as a provocation against the governmental forces and with the aim of accusing the Syrian Arab Army of carrying out that attack.”

Grinkevich added that the Coordination Center, “has received information that preparations are underway for carrying out new provocations by using toxic substances in the eastern part of the de-escalation zone in Idleb.”