Hadi al-Bahra has said that a political solution must be reached in Syria and that the Constitutional Committee is the best hope reports Nadaa Syria. 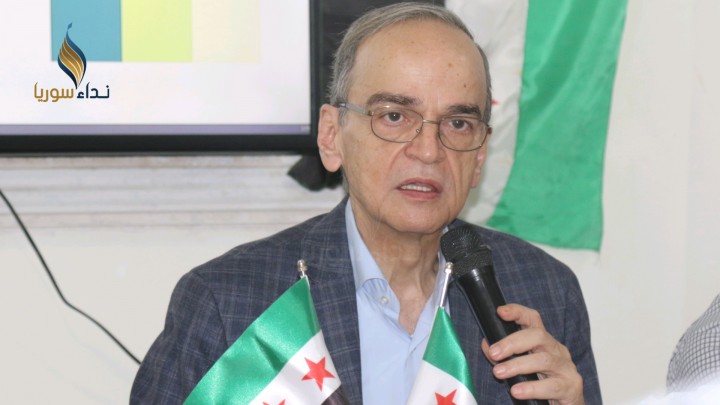 The co-Chair of the Syrian Constitutional Committee, Hadi al-Bahra, talked about the particulars of the committee’s meetings, which took place late last month, and the developments of the Syrian political issue, during a roundtable event in the city of Azaz north of Aleppo. The event was attended by the Syrian Interim Government’s ministers and officials on the local councils in the Aleppo countryside.

Bahra stated that the delegation of the Assad regime on the Constitutional Committee tried hard during the recent meetings in Geneva to give the impression that they are flexible in their dealings.

He said that the Assad regime is exerting great efforts to prevent the launch of the Constitutional Committee’s work, because this gives it independence, and the regime may become embroiled in a situation it cannot control. He also said that the regime is concerned that the committee might end up realizing political change.

Bahra pointed out that the next round of committee meetings will be pivotal, because the regime will have two options — either to seriously engage in discussing the constitutional reform process, or to continue to buy time, which creates a problem for Russia with the US, Turkey, and the European Union.

Bahra considered that Russia will not be able to reach common grounds with various countries on issues of interest, as it has become so involved in the Syrian issue that anything that happens in Syria would impact it. That will also prevent reconstruction and the lifting of sanctions on the Assad regime.

He emphasized the inability of any of the countries involved in the Syrian issue to resolve the situation militarily, and pointed out that a political battle seems currently more fair than a military one, and that fighting the political battle is an exercise in patience.

Bahra added that the military issue is about to end in Syria, as he expects talks to lead to a comprehensive ceasefire in all of the Syrian territories by the end of February, when better visibility about US policies will transpire after the elections, which will coincide with the end of the nations’ efforts to improve their military situation, stopping violence, and kickstarting the political process.

Bahra said, “We are at a crossroads. Either states see an interest in ending the clashes between them by agreeing to implement Security Council Resolution 2254 or, and this is bad for us as Syrians, states agree to stabilize areas of influence, and rely on a long-term political process that would last for 10 or 15 years.”

He explained that countries might think that the Syrian peoples are not yet ready to coexist, given the possibility of retaliations, chaos, and an inability to control matters. Moreover, states may see a necessity in grooming a new generation of Syrians that is ready to inherently accept a political solution.

Bahra believed that the only way to prevent this from happening is to build bridges with people in the areas controlled by the Assad regime, because the issues that the opposition are demanding are not restricted to it, but rather involve everything — such as the future of the young generation, economic opportunities, and ensuring freedoms are safeguarded.