A Jordanian delegation has met with Syrian representatives and congratulated them on the recent elections and the military victories of the Syrian Arab Army writes SANA. 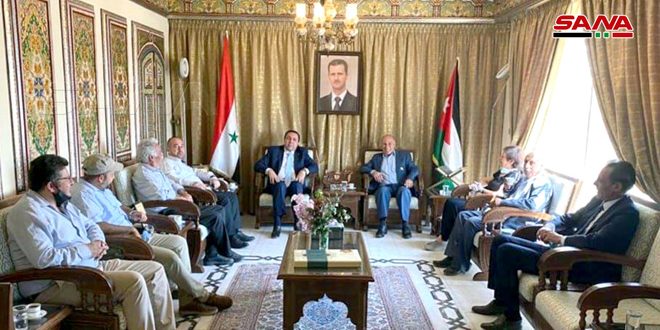 A joint delegation from the Association Against Zionism and Racism and the National Movement Party in Jordan affirmed its solidarity with Syria in the face of the coercive economic measures imposed on it and the practices of the Turkish occupation forces.

During a visit by the delegation to the Syrian Embassy in Amman, Dr. Azmi Mansour, the head of the Association, stressed his rejection of the Caesar Act that targets the Syrian people, expressing his condemnation of the Turkish occupation forces’ attacks on Syrian territory, and of the crime of cutting water to Hassakeh by Recep Tayyip Erdogan’s regime.

Mansour congratulated the Syrian people on the People’s Assembly elections and the formation of the new Syrian government, noting that this reflects the steadfastness, victory, and recovery of the Syrian state, and affirms that Syria is a well-established state of institutions.

In turn, the members of the delegation affirmed their pride in the steadfastness of the Syrian people, army, and leadership in confronting the terrorist war against their country, denouncing the practices of the Turkish regime and its mercenaries and their attacks on Syrian territory and in Iraq and Libya.

For his part, the Chargé d’Affairs of the Syrian Embassy in Amman Dr. Shafiq Dayoub stressed that Syria is heading towards final victory and is on its way to liberate every inch of its lands, stressing that the Palestinian cause was and will remain at the top of its priorities, and that supporting the Palestinian people is a strategic option that cannot be relinquished no matter what challenges emerge.