President Bashar al-Assad has held a meeting to discuss the voting process for the Baath Party and the aspects that worked and failed reports SANA. 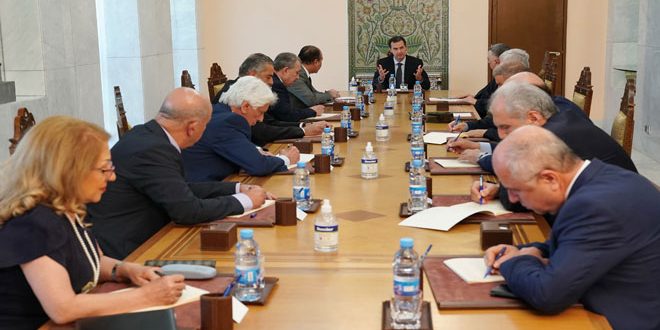 On Thursday, President Bashar al-Assad chaired a meeting for the central leadership of the Baath Arab Socialist Party, which reviewed the latest experimental voting process inside the party. The positive and negative aspects that were revealed in the context of this electoral process and their important indications, not only at the party level, but also at the national level were  considered.

Assad said that the party central leadership should work in accordance with the outcomes of the voting, but take into consideration the public opinion that escorted the voting, as the candidates for the People’s Assembly will not only represent their party, but they will also represent their homeland.

During the meeting, Assad added that the inner-party voting, as an experiment, had succeeded in creating a movement and dialogue, not only at the party level, but at the general national level and it has showed that democratic practices are the best criterion to embody the choices of the electors, and to have their true representatives and candidates join the People’s Assembly.

Assad stressed that the success of the democratic practices depend on its continuity, on developing its mechanisms and adopting the best criteria and the utmost degrees of transparency.

Assad went on to say that the experiment of the inner-voting has formed an embodiment of the public reality, with its positive and negative aspects, and it didn’t become a mere inner-party experiment, it was an important experiment in itself.

“The success criteria of the experiment depends on evaluating it accurately and making use of its lessons in the future, by developing its mechanisms and expanding the base of participation to be able to put an end to the defects, negative aspects and decrease the role of electoral corruption.”