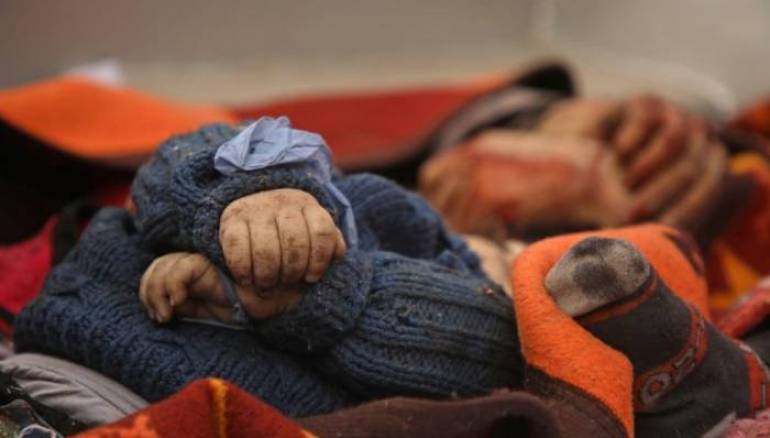 On Monday, Russian airstrikes killed eleven displaced people, including four children and three women, while they were fleeing the western region of Aleppo province.

According to Zaman al-Wasl’s reporter, the Russian airstrikes targeted a minibus carrying displaced people in the Kafrnaha town west of Aleppo city.

The Russian-backed regime offensive has focused mainly on Idleb province in the northwest, and also lately on neighboring Aleppo. It is an attempt to seize control of a strategic highway that links the capital, Damascus, and the north. The push has accelerated in the last two weeks and government forces Wednesday seized control of the key town of Maarat al-Nu’man, which sits along the highway.

According to advocacy group Save the Children, half of those displaced are children, adding that at least 37,000 children were forced to flee in the month of January.

During a one-week period in mid-January, 34 children and 13 women were killed, the UN said.

Trucks and other vehicles have crammed the roads as civilians — some of them already displaced by earlier fighting — packed up their meager belongings to leave the towns and villages under attack.

Idleb and parts of rural Aleppo are the last areas controlled by rebels in Syria. With assistance from allies Russia and Iran, Assad has managed to regain territories earlier lost to the opposition and now controls nearly 73 percent of Syria, according to the Syrian Observatory for Human Rights, a war monitoring group.