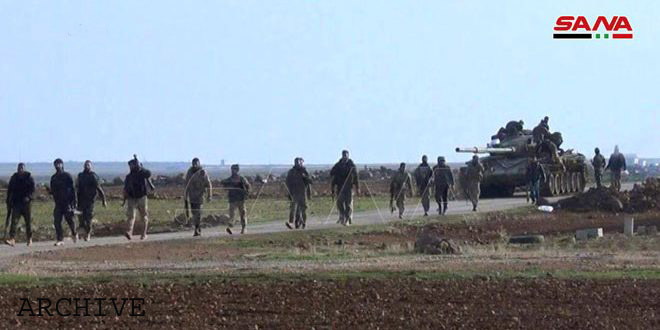 On Thursday, Syrian Arab Army units established control over the towns of al-Sakhir, Tel al-Sakhir and Sawam’a al-Jaisat in the northern Hama countryside, after fierce battles against terrorists, inflicting heavy losses upon them and their equipment.

A military source told SANA that, “Our forces operating in Hama’s northern countryside continue to carry out their combat missions against Jabhat al-Nusra and other armed terrorist organizations positioned in this area with high efficiency.”

The source confirmed that forces managed to destroy the terrorists’ gatherings and storm their fortified positions and command centers after fierce battles, establishing control over al-Sakhir town, Tel al-Sakhir and Sawam’a al-Jaisat.

The source added that military units are still pursuing the remnants of the fleeing terrorists and inflicting heavy losses upon them.