A tragic image of suffering from Idleb goes viral, Lebanon secures the release of an American, a suicide attack hits Daraa and UN says 400,000 displaced in the north. Catch up on everything that happened over the weekend. 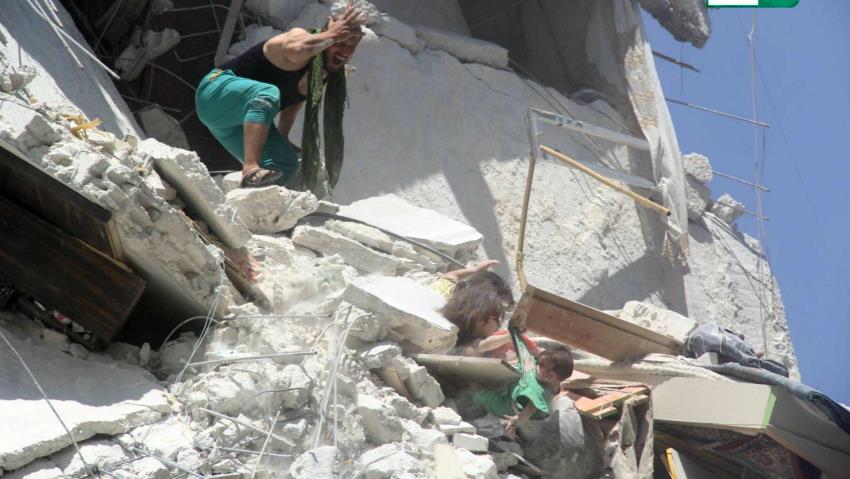 1. The main story this weekend was an image of destruction and tragedy from Syria’s war-torn province of Idleb that went viral on social media this week: two dust-covered Syrian girls, trapped in the rubble, grab their baby sister by her shirt as she dangles off the precipice of a shelled-out building. Above them, atop the rubble, a man – the girls’ father – slaps his hand against his forehead, his mouth gaping in horror or unleashing a scream as he looks on. The image was captured on Wednesday by Bashar al-Sheikh, a photographer working for local Syrian news website SY24, just moments after airstrikes pummeled the town of Ariha in Idleb. Of the three girls in the photo, one is dead and two are fighting to stay alive, Dr Ismail, who treated the victims in a nearby hospital, told AFP. Riham al-Abdullah, aged-five, who appears in the photo gripping her baby sister’s green shirt, died shortly after the regime airstrike hit her home on Wednesday, the doctor said. Her seven-months-old sister Touka, who is shown dangling from the rubble, is in intensive care after suffering wounds to her head. Dalia, the third sister in the photo, is stable after undergoing chest surgery, another doctor in the same facility said.

2. Lebanon’s security chief Abbas Ibrahim held talks with the regime to help free of an American captive being held in Syria, whose identity has not been revealed and who has now been reunited with his family in Lebanon, according to Reuters. “Lebanon has mediated with General Abbas Ibrahim to secure the release of an American and ensure he was handed over to his family. The American is not Austin Tice because his whereabouts is still unknown,” the security official said.

3. The Syrian government expressed “strong condemnation” of what it calls “the continued destructive US interference in its affairs as it aims at prolonging and complicating the crisis, reiterating its categorical rejection of all US-Turkish understandings being a blatant aggression on Syria’s sovereignty and territorial integrity.” An official source in the Foreign Ministry told SANA that, “Syria reiterated its categorical rejection of all forms of US-Turkish understandings that constitute a blatant aggression against Syria’s territorial integrity and national unity and a flagrant violation of international law and the UN Charter.

4. On Saturday, a suicide bomber killed six soldiers in the southern province of Daraa, in a rare deadly attack against the cradle of the uprising that sparked Syria’s war, a monitor said. The bomber, who was riding a motorcycle, blew himself up at a military checkpoint killing the six soldiers and wounding several other people, the Britain-based Syrian Observatory for Human Rights said. Syria’s state news agency SANA also reported a suicide bombing but said it happened during an “army raid” that targeted “terrorists”, a term used by authorities to describe rebels and jihadists. SANA said several soldiers were wounded when, “a terrorist detonated an explosive belt during an army raid”.

5. According to the United Nations humanitarian affairs agency OCHA, more than 400,000 people have been displaced in northwestern Syria over the past three months, the UN said Friday, as the government presses on with an intensified bombardment of the rebel-held region. Most of the displacement is from southern Idleb and northern Hama, the two areas that have been hit hardest by the flare-up. “The majority of those fleeing have been displaced within Idleb governorate while a smaller number have moved into northern Aleppo governorate. Roughly two-thirds of people displaced are staying outside camps,” it said.