Fears of another breakout of violence have increased in the southern province of Daraa, due to the behavior and practises of the regime forces reports Zaman Al Wasl. 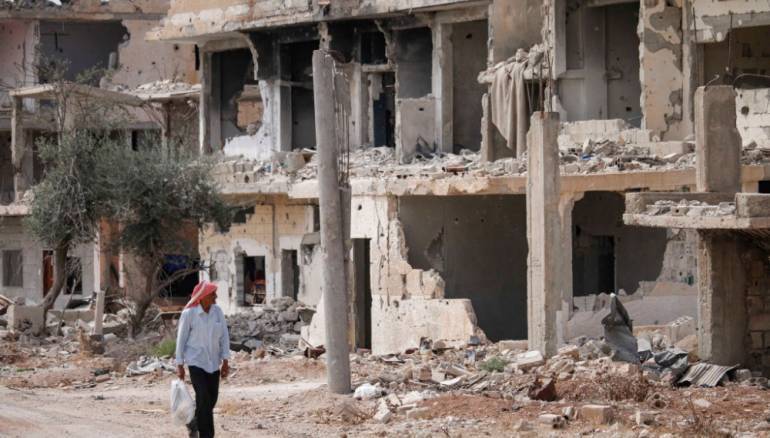 The unstable security condition in southern Daraa province has been leading to severe tensions due to the regime’s revenge policy, despite reconciliation deals.

Local activists say the frustration is mounting with regards to the regime’s security policies of arbitrary arrest and isolating the towns with military barriers.

Horan (Daraa) Free Rally reported that the State Security Branch in Daraa had issued a new list of wanted individuals.

The list names 70 people, most of whom reached a settlement after the regime forces took control of the southern province in July 2018 , including dissident Captain Abdul Hakim Eid, a former leader of the Youth of Sunna forces, who joined the ranks of Russian Fifth Corps, now located in Salma in coastal province of Lattakia.

They explained that, “Among the names on the list, is pharmacist Nejdet Hamdi Zaouqi, who died during a regime artillery bombardment of the city of Jasim on Jul. 31, 2016. He was previously arrested sometime during the revolution, and his brother, a doctor, died under torture in the basements of the regime.”

It was reported that, “The second deadline for those who have completed the mandatory and reserve services and dissidents from Assad’s army in Daraa district is drawing near, as a prevailing state of anxiety and tension grips the region.

It also declared that, “the two checkpoints in Daraa are informing young people to review their situation with the recruitment division within seven days. Any delay and they will be considered a fugitive from military` service.”

On the other hand, the Italian agency, Aki, published a report on the situation in Daraa, which said that a backlash was expected because of Assad’s policies.

The agency said that, “Russia has reduced its military presence in the city and countryside, because the general atmosphere suggests the possibility of an upheaval in the security and military situations again,” noting that the deteriorating economic conditions in the district may contribute to the return of tensions in the region.

Based on informed sources, it stated that the Russian military presence is “almost non-existent,” asserting that, “it is confined to the barriers and some points across the countryside, but hardly seen.” Adding that, “the two parties, the opposition and the regime, are in a state of calm and anticipation, with neither party trusting the other to the fullest. There are no mutual checkpoints, each side sitting in its position, as if everyone is on alert and ready to return to confrontations and combat operations, as before.”

The sources stressed the ability of the Syrian opposition to “regain its strength if tensions return,” explaining that the opposition, “handed over in the ‘reconciliation’ agreement, sponsored by Russia, heavy weapons only, while keeping medium and light weapons, which gives them the ability to rise again in cases of emergency”.

The agency pointed out that Daraa witnessed unrest and unexpected demonstrations after the regime restored a statue of Hafez al-Assad, in symbolic reference to the statue that was destroyed by demonstrators in March 2011 at the beginning of the uprising, which turned into a large-scale armed clashes.”

The agency said that, “the people of the city suffer from difficulties of living and inflation, while the Jordanians took to the majority of the crops and agricultural products produced by the people of the district.”