The returning citizens thanked the Syrian Arab Army for liberating their towns and villages from terrorism reports SANA. 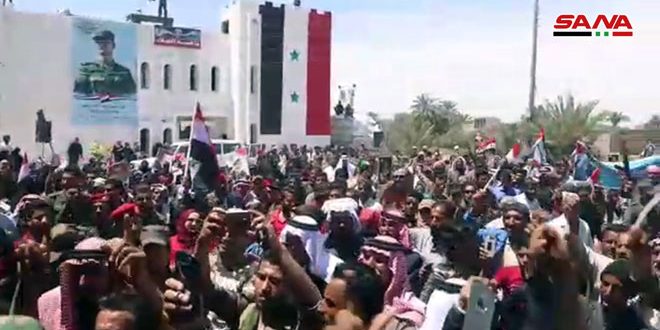 Amid celebrations held in the al-Jalaa area in the al-Bokmal countryside, 3,800 citizens returned to their cities and villages that have been liberated from terrorism in Deir ez-Zor’s southeastern countryside.

Deir ez-Zor Governor Abdul-Majid al-Kwakibi, affirmed that: “Within the framework of the amnesty decree and with the aim of achieving the return of all citizens who have been displaced from their houses and villages, on Sunday, 3,800 citizens returned to the villages and towns of al-Sayyal, Hasrat, al-Salihyia, al-Ramadi, al-Jalaa, Qita’at al-Bokmal, al-Abbas and al-Tawatiha in the Deir ez-Zor countryside.”

Kwakibi noted that, “All basic services have been provided for those returning and governmental facilities were activated in the villages and towns.”

They expressed happiness at their return to the homeland, affirming that the victories achieved by the Syrian Arab Army, which eliminated terrorism, have created opportunities for new happy lives for all Syrians.