Both sides highlighted the need to re-open the border crossings between the two countries as a way of stimulating trade reports SANA. 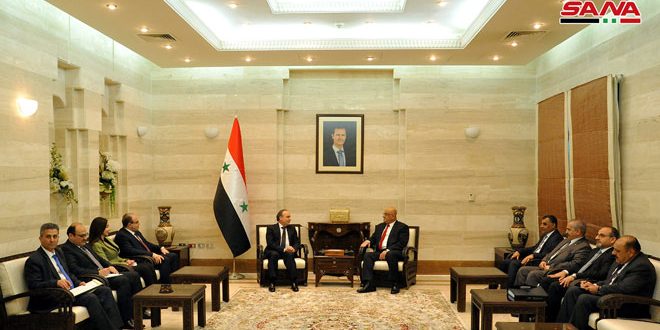 On Wednesday, Prime Minister Imad Khamis discussed with the Iraqi Minister of Trade, Mohammad Hashem al-Ani, means of developing economic relations and broadening prospects of trade and investment between Syria and Iraq as well as continuing cooperation in the war against terrorism.

During the meeting, Khamis affirmed Syria’s determination to go ahead with their war against terrorism until all Syrian territories have been liberated, and provide all materials needed for the reconstruction.

He pointed to the importance of accelerating efforts to re-open border crossings between the two countries, as a way of activating the movement of trade.

Minister Ani, for his part, stressed the necessity of activating agreements signed between Syria and Iraq to help enhance cooperation in the fields of energy, oil, electricity, transportation and recover from the terrorist war imposed on both states.