The aid from Belarus, a strong ally of Syria, contained enough clothing for a thousand children and materials for 30 classrooms reports SANA. 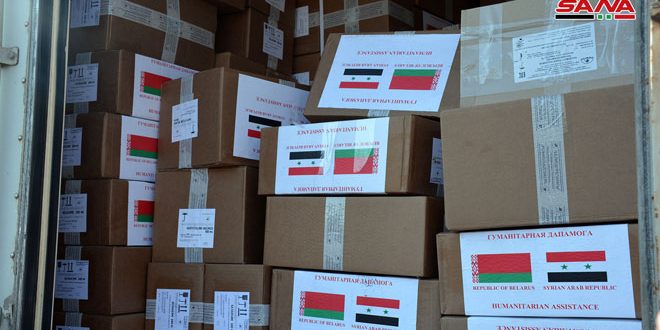 On Tuesday, Syria received a new shipment of aid sent by Belarus, including three power generators, school supplies, medical supplies, food, clothing and shoes for children, in addition to two trucks and a bus.

Governor of Lattakia, Ibrahim Khedr al-Salem, thanked Belarus’ leadership, and government, and people for their support of Syria, which shows the strength of the friendship between the two countries.

Belarus’ Deputy Emergencies Minister, Igor Bolotov, said this aid shipment is an implementation of President Alexander Lukashenko’s decision and shows the strength of relations between the two countries.

Bolotov said the shipment contains clothing for a thousand children, and equipment to outfit 30 classrooms.

He also pointed to the economic and social relations between Belarus and Syria, affirming his country’s readiness to support Syria in confronting terrorism.