US Congresswoman Tulsi Gabbard has condemned the protection that the Trump administration is giving to known terrorist writes SANA. 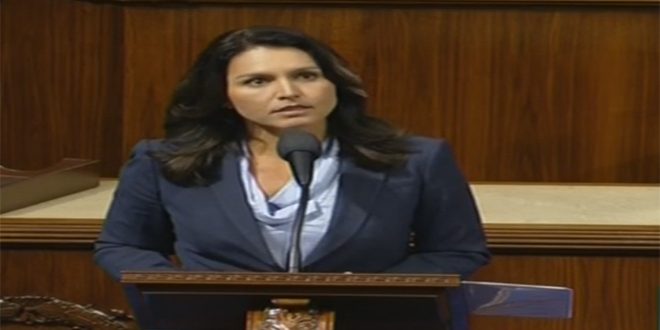 US Congresswoman Tulsi Gabbard said that the protection offered to the Islamic State (ISIS) and other terrorist organizations in Syria by the administration of President Donald Trump is a betrayal of the US people and the victims of the 9/11 attacks.

The website “Gabbard House” quoted the US congresswoman from a session of the US House of Representatives on Thursday as saying that “Two days ago, President Trump and Vice President Pence delivered solemn speeches about the attacks on 9/11, talking about how much they care about the victims of al-Qaeda’s attack on our country. But, they are now standing up to protect the 20,000 to 40,000 al-Qaeda and other jihadist forces in Syria, and threatening Russia, Syria, and Iran, with military force if they dare attack these terrorists.”

She added that this is a betrayal of the US people, particularly of the victims of the 9/11 attacks and their families and those “who wear the US military uniform.”