Labwani: "this is not an American initiative, and there is no conspiracy against the statehood of Syria. 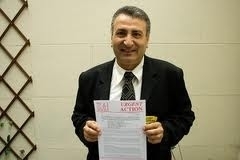 All4Syria – 02/11/2012: A group of opposition figures met in Amman, Jordan to join their efforts for the upcoming meeting in Doha next week.

The meeting comes in preparation for a meeting that will e held in Doha next week, to establish a new national council that will comprise 50 members, divided as follows: 14 represent the internal opposition, 15 from the current SNC, 3 represent the Kurdish National Council, and 22 from different political opposition groups. The new council will work on forming a transitional government to be the legal reprehensive of the Syrian people.

Political activist Kamal Labwani, who attended the meeting, said that the participants stressed that there will be no dialogue before the President Assad’s regime has fallen.

Labwani, who said that the initiative has come to unify the Syrian opposition, reiterated that this is not an American initiative, and there is no conspiracy against the statehood of Syria.

He added that the government will be based in Jordan, if the Jordanian government agrees, or else it will be in any other Arab country.

The participants did not agree on the name of the head of the upcoming government.