Syrian President Bashar Assad warned on Wednesday the West that it will pay a heavy price for its alleged support of al-Qaida in Syria and said his regime's defeat is not an option. 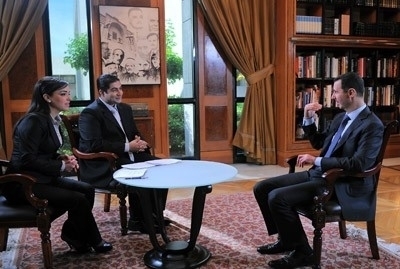 Syrian President Bashar Assad warned on Wednesday the West that it will pay a heavy price for its alleged support of al-Qaida in Syria and said his regime's defeat is not an option.

Assad, whose has been battling an uprising since March 2011, told state television al-Ikhbariya in an interview that the West is playing with fire.

"The West has paid heavily for funding al-Qaida in its early stages. Today it is doing the same in Syria, Libya and other places, and will pay a heavy price in the heart of Europe and the United States," Assad said.

"We are facing a new war, a new method" with fighters, some of whom are Arabs, not Syrians," the president said in the hour-long interview, adding that the "army is not fighting a war to liberate Syrian territory, but a war on terror."

While saying the "situation is better now than it was before," he claimed that "there are big powers, in particular the United States, that do not accept countries to be independent; they want them to be submissive."

The president did not spell out how he believed the West was supporting al-Qaida in Syria. In fact, the United States and EU countries have been loathe to fulfill rebel requests for arms for fear they might fall into the wrong hands.

But he insisted that "everyone who carries weapons and attacks civilians is a terrorist, be they al-Qaida or not."

The regime has long used the word "terrorist" to describe those who have taken up arms against it.

Assad also warned that a defeat of his government would spell the demise of Syria, and vowed that he will not surrender.

"There is no option but victory. Otherwise it will be the end of Syria, and I don't think that the Syrian people will accept such an option," he said.

"The truth is there is a war and I repeat: no to surrender, no to submission."

As for his own future, he said that would be decided by the people.

"The position (of president) has no value without popular backing. The people's decision is what matters in the question of whether the president stays or goes," he said Assad, suggesting he might stand for a new term in elections slated for next year.

Assad took to task neighboring Jordan, which says is hosting around 500,000 Syria refugees, accusing it of allowing rebels free movement across its borders.

"I cannot believe that hundreds (of rebels) are entering Syria with their weapons while Jordan is capable of arresting any single person with a light arm for going to resist in Palestine," Assad said.

"We would wish that our Jordanian neighbors realize that… the fire will not stop at our borders; all the world knows Jordan is just as exposed (to the crisis) as Syria."

In Amman, meanwhile, Information Minister Mohammad Momani said the United States plans to deploy 200 troops in Jordan because of the war in neighboring Syria.

"The deployment of the troops is part of U.S.-Jordanian military cooperation to boost the Jordanian armed forces in light of the deteriorating situation in Syria," Momani told Agence France Presse. He did not say when the troops were due to arrive in Jordan.

Assad has repeatedly blamed enemies and conspirators for the deadly unrest rocking Syria, where the U.N. says more than 70,000 people have been killed over the past two years.

And he told al-Ikhbariya that, "from the first day, what is happening in Syria is dictated from abroad."

The interview was timed to coincide with Syria's Independence Day, which marks the 1946 end of French rule.

Meanwhile, staunch Assad ally Russia warned that the Friends of Syria group of countries opposed to the Damascus regime was playing a "negative" role in resolving the conflict.

"Right now we see this process is making a negative contribution to the (Geneva) decisions," Russian Foreign Minister Sergei Lavrov told reporters in Istanbul, referring to a 2012 accord aimed at ending the conflict through talks between all parties.

A Friends of Syria meeting is set for Istanbul on Saturday to be attended by U.S. Secretary of State John Kerry as well as several of his Western and Arab counterparts.