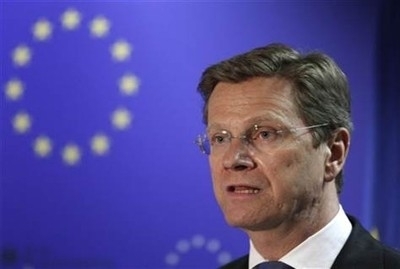 France and Germany on Thursday expressed their opposition to arming the Syrian opposition and emphasized the need to reach a political solution in the country.

German Foreign Minister Guido Westerwelle renewed his country's objection to sending weapons to the so-called Syrian opposition and the need to find a political solution to the crisis in Syria.

During a press conference in Nuremberg, Westerwelle said: "those who are exporting weapons to the Syrian opposition have to make sure that they do not fall into the hands of Jihadists and terrorists."

He rejected the notion of any military solution in Syria, saying "we have to focus on the political solution, even if it has slim chances for success."

"We are working on settling the crisis in Syria and will continue to do so, with close cooperation with France and the U.S., because that's what we have to do as representatives of the international community," he told the BBC on Thursday.

"But at the same time, we do not want to get involved in a military crisis," he added.

For his part, France's foreign minister Laurent Fabius said it is unlikely that France would offer weapons to the Syrian opposition "that might be turned against us."

In press statements in Paris, Fabius said "we do not offer weapons to be directed at us."

"We have always said that we are here to help the opposition to reach a political solution, but as for weapons, it is unlikely that we will offer weapons amid uncertain circumstances…which means that we won't be offering weapons that might be turned against us."

Fabius said that Paris needs to hold talks with the Syrian opposition before providing them with heavy weapons.