A Conference and a series of workshops were held in Beirut between 10 and 10 June, 2013 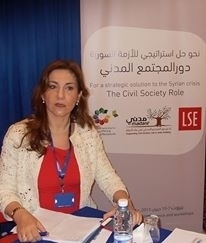 Given the failure of Syrian political forces in presenting clear strategies to resolve the crisis, it is vital that Syrian civil society is able to play a leading role in presenting solutions and taking key decisions facing the country.

The emerging civil society in Syria is playing an important stabilizing role in the Syrian crisis. It is now presenting organic home-grown solutions reflecting the deep roots of the conflict in Syria and the genuine needs of Syrian society.

Civil society activism is now increasing at a faster rate than political activism in Syria. This is because the regime has had to tolerate it and because the political community has not evolved, still unable to provide a convincing strategy. The role of civil society should be to mobilise society's innermost powers to end the current crisis and to lead the building of a new Syria that isdemocratic, transparent, efficient and accountablewith just institutions that will achieve inclusive and people-centred development.

The conference will allow Syrian experts and civil society activists to assess the role the civil society in Syria in order to develop an understanding of main gaps and obstacles that have hindered a more active role. It will develop alternative scenarios to exit the current crisis towards a better future.

Syria, since March 2011, has been witnessing one of the most existential challenges in its recent history.  This reflects the transformation from asocial and political movement opposing tyranny to an internal armed conflict.  The crisis revealed a complexity of factors at all levels – political, economic and social, inside and outside Syria. Freedom, which all Syrians have been deprived of together with the lack of efficient and transparent institutionalised representation, was at the top of the objectives of the different partiesinvolved.

The armed conflict is a tragic dimension of this crisis, where suffering, loss of life, destruction of property, infrastructure and houses are rising alarmingly. The demand for economic, social and institutional reconstruction is growingin all areas of the country.

The institutional failure of the political regime is at the heart of the crisis especially the inability to establish participatory institutions that guarantee public freedoms and respect people’s dignity. There needs to be genuine accountability that enhances social justice and reduces poverty.

The crack in the social coherence of Syrian society has been the result of the traditional oppression of the regime reflected in violent confrontations with the social movement and oppressing the civil, human and legal activities. This forms a huge obstacle to civil, democratic and peaceful solutions and opens the door to violence and social hatred.  It also allows outsiders to exacerbate this crack and to finance the various parties risking a continuous internal armed conflict.

During the last two years, the Syrian opposition has developed multiple different forms including social movements, coordinating bodies, political committees, as well as armed groups including the Free Syria Army and the religious forces.  Yet, it failed to develop an integrated and clear project that represents the Syrian society’s priorities and that unifies efforts into one front.  This was due to different factors including the violence of the regime, the huge direct and indirect political foreign intervention, the weakness of institutional culture and the lack of political expertise.  The differences within the opposition were severe. There has been no agreement on principles and strategies, the weakness of participatory institutional process and avoiding the major questions facing the Syrian society.

The fact that most of the parties sought support from foreign powers has resulted in a serious threat to the independence and sovereignty of Syria with an increased dependency on these players to solve the current armed conflict. This weakens the role of Syrian civil society in developing the desired solution to the crisis.

1-      Understanding the role of Syrian civil society (inside and outside) during the crisis from the following angles:

o   Social and cultural features and dynamics of civil society

o   Agreeing on the preferable scenario

4-      Framework of the strategy towards the preferable scenario