The Syrian National; Coalition wants to create a 10-person executive council as a possible alternative to interim government 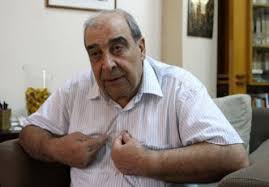 The Syrian National; Coalition wants to create a 10-person executive council to reorganize disparate rebel factions into a structured army with adequate financing and weapons, one of its senior members said on Monday.

In an interview in Paris with Reuters, veteran dissident Michel Kilo said the coalition aimed to elect the executive council at its general assembly in the next month. Its members would act as quasi-ministers and would be based within zones under rebel control in Syria and in border areas, he said.

"There will be a bureaucracy linked to the interests of Syrians and independent of the president and the leadership of the coalition," said Kilo, 72, who spent six years in jail for criticizing Syrian President Bashar al-Assad. He has lived in France for the last two years.

His liberal bloc within the fractious Syrian National Coalition has grown in influence since Ahmad Jarba was elected president this month. Jarba is a member of Kilo's bloc.

The formation of this new council is regarded as a possible alternative to the interim government which did not come to life, since the designate prime minister Ghassan Hitto announced his resignation on last week, nearly four months after his appointment and having failed to form a government.

"I announce I will not continue in my capacity as prime minister tasked with leading the interim government, though I emphasize I will continue working for the interests of the revolution and towards achieving its objectives," Hitto said in an online statement.

Kilo predicted that the war in Syria would last a long time now that foreign factions had joined what had become a theatre for a region-wide Sunni-Shi'ite sectarian conflict, complicated by a growing rivalry between Russia and the United States.

Kilo said the coalition was working towards setting up a bank, or de facto finance ministry, to channel funds from the Syria diaspora in a more ordered way.

Kilo, a Christian, has spearheaded efforts by the Sunni-led opposition to garner the support of minority groups fearful of an Islamist takeover should Assad be overthrown.

"We started a revolution for our freedom, but we are now more and more the weakest on this stage, this game," he said.

"It is a war that since Hezbollah entered will extend and last for a long time," he said, referring to the Iranian-backed Lebanese Shi'ite armed movement. "It was a war between a regime and a population, but now it is a regional war."