Lavrov said circumstances for the conflict will never be "perfect" 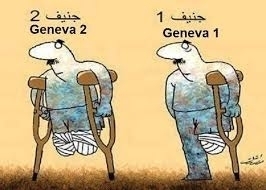 Russian Foreign Minister, Sergei Lavrov, stressed the importance of holding the international conference on Syria, Geneva II, without preconditions, pointing out that there will never be “perfect circumstances” to hold it.

In a press conference in Moscow on Wednesday, Lavrov said that the parties trying to impose conditions for convening Geneva II are basically seeking to postpone it or even abort it.

Lavrov said those sides are waiting for "military balance" on the ground in Syria or waiting for some kind of support from a certain party which is actually trying to derail or completely annul the conference.

He stressed that the U.S. and Russia have a common stance in this regard, adding that according to the discussions with the U.S. Secretary of State, John Kerry, the conference should be held without preconditions.

"Russia, which has been eager for the Geneva II conference to be held earlier, will try to utilize the period before convening the conference scheduled on 22 January to consult with all Syrian sides," the Russian Foreign Minister said.

Lavrov pointed out that Russia is discussing with different opposition forces the idea of a meeting among opposition parties, noting that all opposition sides that Russia communicated with have expressed interest in participating.

The U.N. announced on Monday that Geneva II will be held on 22 January.

Meanwhile, Lavrov and his Italian counterpart, Emma Bonino, stressed in Rome that the time before holding the international conference on Syria in Geneva must be seized to convince the countries which have rejected the conference to participate.

The Italian news agency AKI quoted the Italian Foreign Ministry as saying that the two sides welcomed the decision of the U.N. Secretary-General on setting the date.