No one objected to the deal, nor to Assad’s right to continue to steal the wealth of the Syrian people 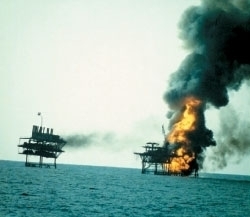 On the sly, Mohammed Makhlouf, Bashar al-Assad’s uncle, led a deal in which the Assad regime offered a piece of the pie to his Russian allies. Soyuzneftegaz, a Russian oil and gas company, has signed an agreement with the Syrian Oil Ministry to explore for oil and gas in the “territorial waters" of the Syrian continental shelf, in an area of 2190 square kilometers.

The timing of this deal is indicative of several different points, taking in consideration the nature of the Syrian situation and the inconsistency of international actors’ positions. The deal indicates that Assad has begun selling out the Syrian people’s fate and wealth to his allies. It also shows that Assad is staying in power, at least from the standpoint of the great powers— how else could the huge, 25-year contract with Soyuzneftegaz be explained? The Russian company is owned by a variety of owners and headed by Russia's former energy minister Yuri Shafranik, who is close to the KGB’s man, Vladimir Putin.

The importance of this deal is that it was done out in the open, with the world and the Syrian opposition watching. This was, perhaps, an indication of the legitimacy of Assad, whom the UN recently classified as a war criminal. Reports have unequivocally confirmed that Assad was responsible for the use of chemical weapons that killed children in the Eastern Ghouta region of Damascus. Assad is also still punishing Aleppo, the economic capital of Syria, dropping barrels bombs in a manner unprecedented in previous wars.

Then comes Geneva II, completing the legitimacy for "the President of the Resistance" who fights terrorism and extremists and who works to prevent their infiltration into the secular state. He even reassures Israeli leaders who chimed in with the Russians, and who saw in Assad the salvation of Syria from extremist groups.

No one objected to the deal, nor to Assad’s right to continue to steal the wealth of the Syrian people, to use Syria’s natural resources to finance the "bread war" and to supplement his and his family’s assets in Western banks. Recently, it has been said that there have been loopholes in the freezing of Assad’s assets and that some of this stolen money was distributed and used to kill Syrians.

The most optimistic statements, made by Imad Fawzi Shuaibi, the director of the Damascus-based Strategic Studies Center, say that four oil fields found in the area between the Lebanese border and the Syrian port of Baniyas could potentially produce as much oil as Kuwait. According to Shuaibi’s predictions, the extraction of oil in Syria could, over time, reach six to seven million barrels per day. Shuaibi did not rule out the possibility that in the future Syria could rank fourth in the world in terms of oil reserves.

Specialists predict that these oil reserves may have an estimated 2.5 billion barrels at a production rate of 377,000 barrels per day. Oil production is about 24% of Syrian gross domestic product, 25% of budget revenues and 40 % of export earnings.

Syria’s oil production dropped from 600,000 barrels per day in 1996 to 400,000 barrels in 2006, then down to 387,000 barrels just before the revolution, and production has now dropped to zero barrels, according to a statement by Qadri Jamil, Syria’s Deputy Prime Minister for Economic Affairs.

Before the revolution, and before Assad offered Syrian land and blood to his allies, the total discovered geological reserves in Syria was about 24.3 billion barrels of oil and 703 billion cubic meters of gas—a 52% increase in oil and an 88% increase in gas from the 1990 estimate.

The bottom line is that the Assad regime offered a great deal to the Russians in order to make it clear that it would pay the necessary price to stay in power and remain immune to the international justice system.

The Syrian opposition did not protest in response to the forfeiting of Syrians’ fate and resources. This might be because of the timing—right before Geneva II—with the opposition perhaps not feeling it suitable to divert attention away from this historical opportunity to sit with the regime, take pictures and make speeches, and consequently  ensure its place in history as a savior. Iran, on the other hand, will enter the history books by the Gate of Zeinab (the daughter of Imam Ali) and other religious symbols. As for Russia, it will mark its place in this history with its oil and warm water ports. Each has a convenient door through which to enter, but the exit and the price are still unknown.