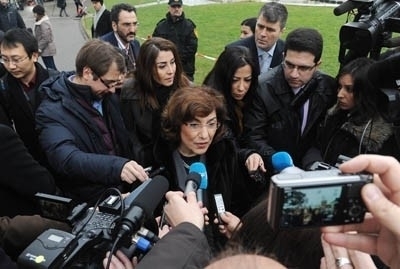 Information Minister Omran Al-Zoubi on Sunday said the humanitarian issue should be dealt with as a whole, not piecemeal.

Zoubi told reporters in Geneva that the Syrian government wants to provide all Syrians in need with assistance, regardless of their political stance.

The minister said humanitarian aid is second on the list of the Syrian government's priorities at Geneva,  after security, but said "we should be realistic regarding the way to deliver aid."

"There are thousands of people kidnapped by armed terrorist groups for more than two years. The [SyrianNational Coalition] delegation should submit lists of their names and be held responsible for their release," Zoubi said.

"The U.S. is involved, through its intelligence agencies in a lot of what happened in Syria, supported by Turkey and Qatar," the minister said.

In a statement to reporters in Geneva on Sunday, Shaaban said that the conference "is first and foremost meant to stop terrorism, from which the Syrian people have been suffering, stopping the shedding of Syrian blood, restoring security and stability and restoring institutions. Then it is up to the Syrians to decide upon the political track they want,” she said.

She added that the Geneva I communique created a suitable environment for launching the political process.

“Is the environment in Syria today suitable? Can they, or can we, reach areas in need? And can the Syrian people go to the ballot boxes and express their opinion freely under all this ongoing terrorism, while they are  unable to go a factory or a school?” Shaaban asked.

Regarding the Coalition delegation's focus on aid to the Old City of Homs, rather than other areas, Shaaban said: "Probably, they have some loyal gunmen there, but the Geneva II conference is not about discussing relief for a minor area," she said, adding that the Homs Governor and the competent authorities would tackle this issue.