Mouallem tells reporters he rejected direct dialogue with the U.S. 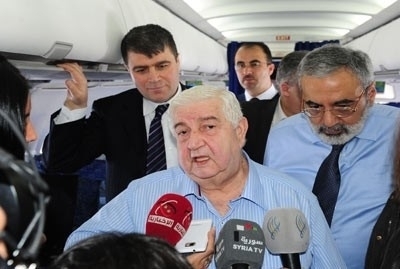 Syrian Foreign Minister Walid Mouallem said that the Syrian side rejected a U.S. request in Montruex for direct dialogue, without “the tools embodied in the Coalition delegation of the so-called opposition" unless U.S. Secretary of State, John Kerry, apologizes for what he had said during the opening speech of the conference.

In a press statement to media accompanying the official delegation aboard the plane returning to Damascus, Mouallem said the rejection "is a mark on the forehead of the coalition's delegation."

"As I said yesterday, any person in the world who suffered from terrorism woud adopt this draft statement," Mouallem said regharding the statement the Syrian delegation presented, but which was rejected by the Coalition.

“They have not lived in Syria; they were not with the school and university students when mortar shells fell on them; the bodies of their relatives were not mutilated and they did not suffer from destruction of bridges, gas pipelines and infrastructure. They live in 5-star hotels, so it is not strange that they rejected because they do not live in the Syrian reality,” Moallem said.