Over the course of two years, Suhad has tried a large number of these cheap, low quality products and has become efficient in selecting the best ones 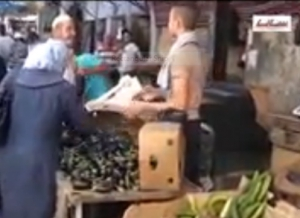 A few people hover around a stall selling cleaning products in Thawra Street in central Damascus. A man in his forties raises his voice as he argues with the seller, accusing him of cheating after he bought “useless” detergent from him. The seller does not allow him to return the product, but offers to exchange it for another one in an attempt to assuage his anger. Nearby, other stalls occupy the sidewalk selling different types of food items for prices low enough to raise doubts about their quality or whether they had been doctored in some way.

Before 2011, there was little demand for the cheap, low quality products sold at these types of stalls on sidewalks or streets which used to cater primarily to the poor. However, the deterioration of the economic situation and the resulting unemployment rate, which reached 42 percent according to a recent United Nations report, and a rise in poverty led many Syrians to frequent these stalls, which have in turn increased to accommodate rising demand.

These stalls populate many streets and sidewalks in Damascus and are most prominent in popular markets such as those in Thawra Street, side streets in Al-Fahama and Al-Marja, the Old Cardamom Souk, and the Bab Srayjeh Souk. Syrians can find products in these markets for very low prices. Unbranded shampoo and dish washing liquid for example cost between 0.67 US dollars and 1.30 dollars, while their prices in regular markets vacillate from 2.00 to 2.67 dollars. A kilogram of milk costs 0.60 dollars as opposed to 0.90, local cheese 4.00 as opposed to 5.67, yoghurt 1.67 as opposed to 2.67, and coffee 4.67 as opposed to 6.67.

“I know of course that these products are of lower quality, and some are even doctored. But these prices are lower and suit my meagre income,” said Abu Rami, 45, a government employee who frequents these stalls.

Suhad, 35, a homemaker, is selective about which of these products she buys. Over the course of two years, she has tried a large number of these cheap, low quality products and has become efficient in selecting the best ones.

“I only buy from specific stalls and shops, particularly if I’m shopping for food that doesn’t spoil easily and cause health problems, such as cheese, yoghurt and oils. I avoid buying meat from there,” she explained.

“I have a family of six. If this place hadn’t existed we would not have been able to eat meat,” he said. “The butcher says it is fresh local meat, but everyone knows it is mixed with fat or imported meat, which explains why the price changes with the fluctuation of the exchange rate.”

A stall owner categorically denied any adulteration to his merchandise.

“I buy large quantities and I sell them here at wholesale prices,” he said.

A 40-year-old man named Adel, a wholesaler at the Bab Srayjeh market, sneered at this claim.

“If they are wholesalers, then what am I?” he asked. “The price of cleaning products is low because they reduce the amount of the active agent during production. Some detergents are mixed with salt, yoghurt is mixed with starch, and meat with fat. They also mix olive oil with vegetable or soya oil,” he added.

Adel says he does not know who exactly doctors these products.

“Maybe the stall merchants do it themselves. It’s possible that there are undeclared factories that produce these adulterated products that are distributed to the stalls,” he said

The doctored products have not escaped notice of manufacturers in Damascus.

“The chaos, recklessness, and cheating in most markets has reached hysterical levels,” Marwan Dabbas, the director of the Union of Craftsmen in Damascus, told the government-run Al-Thawra newspaper. He decried the lack of oversight.

“Why has a kilo of yoghurt decreased by 200 grams but costs the same? On what basis are they allowed to do this? And how was the oil used for making tahini-based sweets substituted for vegetable oil, while the tahini itself is mixed with cheap ground rice that already contains harmful things such as rice weevils [destructive beetles]?” he asked.

“The crisis has led many unemployed people to trade in cleaning products on sidewalks and streets, taking advantage of the closure of many factories and the lack of production,” said Adnan Dakhakhni, the director of the Organization for Consumer Protection, in a statement to Al-Watan newspaper. “This allowed harmful, doctored products to circulate, and some shops have started carrying them in order to make a larger profit.”

The government has also been following this issue, frequently reporting about the closure of shops that cheat customers in Damascene markets in the sale of meats and the production of cheeses, yoghurts, cleaning products and even medicine. According to the Syrian Days website, the Ministry of Internal Trade and Consumer Protection announced the closure of “a warehouse containing approximately five tons of expired food products and raw materials for their production in the Jazmatiya area. The items were confiscated and the warehouse shut down, and its owner was prosecuted.”

Between the actions of the government and the interest of the merchants, citizens have one stance. “If the government is as concerned about us as it claims, then it should raise wages, provide jobs, and prosecute those who raise prices. We don’t have a problem with the stalls. Our problem is with the increase in prices and merchant greed,” said Abu Ziad.