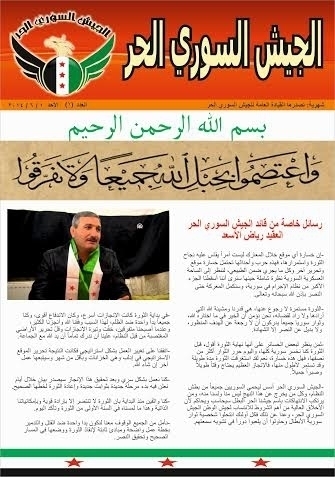 The issue consisted of four pages, discussing many topics related to both political and field developments, in addition to some statements from Colonel Riad al-Asaad, the leader of the FSA.

The newspaper is prepared and edited by a number of Syrian revolution media professionals. According to the editor-in-chief, four pages are just the beginning, and the number of pages will soon increase and include various political and field news taking place on the Syrian ground.

The editor-in-chief told All4Syria that "we will start with 5,000 copies, but the figure might double in the next issue."

Colonel Asaad told All4Syria the reasons for issuing the newspaper: "After we noticed that many satellite channels broadcast information according to different policies, we found it necessary to have our own media to tell the Syrian recipients the truth."

"As you know, the liberated Syrian areas live in difficult circumstances, where there is a lack of electricity and Internet, so it is necessary to send published information to the youth of the revolution inside Syria, and to address our FSA heroes directly. We found that this method is effective," he added.