Attar was speaking at an exhibition on Palestine in Damascus 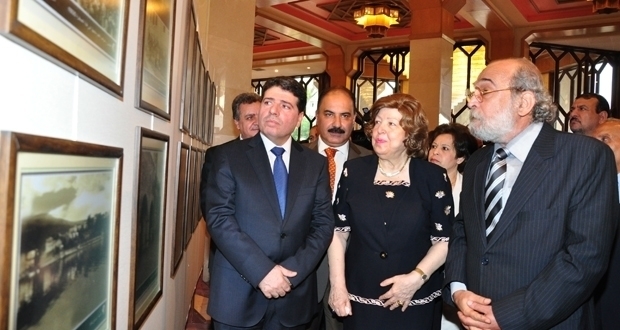 Vice President Najah al-Attar said on Monday what is happening in Gaza is not a conflict between two sides, but “usurpation and an aggression by a side which has no rights, no history and no belonging.”

“We are the owners of all rights, land, history and heritage,” sai Attar, as he inaugurated an exhibition titled: “Palestine yesterday, today and tomorrow', adding that the "true understanding of our belonging to our Arabism gives us momentum to defend our lands, rights and families".

The exhibition, which was opened under the patronage of President Bashar Assad at the Assad House for Culture and Arts, displayed of photographs about al-Quds, the holy mosque of al-Aqsa and the excavations carried out by Zionists under it, in addition to other Palestinian cities like Haifa and Gaza.

Attar confirmed that Syria, under the leadership of President Assad, is committed to the Arab rights and principles, calling for cooperation to defeat terrorism, to which Syria is exposed.

Later, Attar, accompanied by Assistant Regional Leadership of the Baath Arab Socialist Party, Hilal al-Hilal and Prime Minister-designate Wael Halqi and Palestinian figures, toured the exhibition and listened to an explanation about the photos.

Presidential Political and Media Advisor Bouthaina Shaaban stressed that Israeli aggression on Gaza Strip couldn’t achieve its goals, adding that the Palestinian resistanse had proved its awareness and vigilance against this aggression.

In a statement on the sidelines of the exhibition, Shaaban called on Arabs to support the Palestinian people because they are being targeted by this aggression.