Turkish officials roll up sleeves aganist the xenophobia toward 1.128 million Syrian refugees as the biometric registration of 740,000 Syrians is finalized 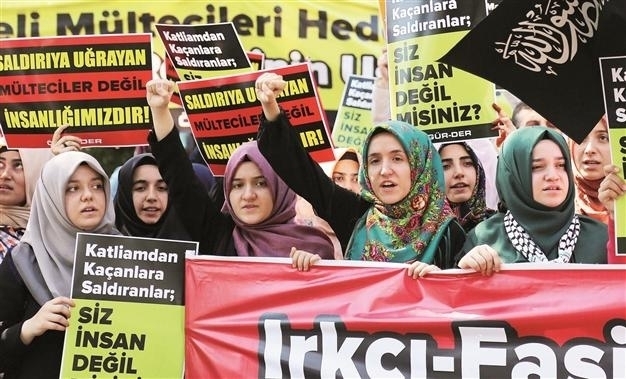 Turkish officials have finally decided to take measures against growing xenophobia against Syrian refugees, issuing a joint statement that acknowledged the hostility toward the newcomers and vowing to fight discrimination.

The issues of health, education, the economy, the workforce, women, the family, public safety, legal arrangements, smuggling, border security and others were assessed in the meeting, according to a joint statement by the participating institutions.

The joint statement indicated that Turkish officials acknowledged that Syrian refugees were likely to remain permanently in Turkey, as it noted how efforts at the schooling of Syrian children would be intensified.

Government efforts for education of Syrian children will be extended, and the government will encourage them to learn Turkish in order to minimize social problems, said the statement on Aug. 23.

Syrians under “temporary protection” display gratitude to Turkish people at every turn and pay maximum attention to integrate into society, read the statement.

“Despite this positive attitude and efforts, some provocations and disinformation stir up xenophobia and discrimination,” said the statement.

Current efforts that have been undertaken with state institutions and civic society against xenophobia and discrimination will be boosted, read the statement.

The crime rate and involvement in criminal cases by Syrians are “quite low,” but any incident has a broader repercussion in society that leads the way to discrimination, according to the statement.

The government has achieved progress on border security over the last year with the cooperation of the Turkish Army and the Interior Ministry, said the statement, adding that efforts would continue to correct deficiencies.

The Turkish government finalized the biometric registration of 740,000 Syrians and the rest will be under registration in a few months, according to the statement which also said 218,121 Syrians had taken shelter in camps, while 1,127,970 Syrians live in cities across the country.

The government will take necessary measures against mendicancy, prostitution and polygamy that harm society, said the statement, noting that they would advance efforts to find solutions to the negative impacts of Syrians enter the workforce.

Syrians who are living on streets are being taken to temporary sheltering centers by local governors, read the statement, adding that the practice would continue.

Tensions between local Turks and Syrian refugees living outside camps first boiled over in Gaziantep last month, when locals attacked a Syrian after a traffic accident.

The latest attacks on Syrian refugees in Gaziantep were sparked by the fatal stabbing of a Turkish landlord, allegedly by his Syrian tenant, and led to a major exodus of refugees from the city.