The Islamists say the writing on gravestones is heretical 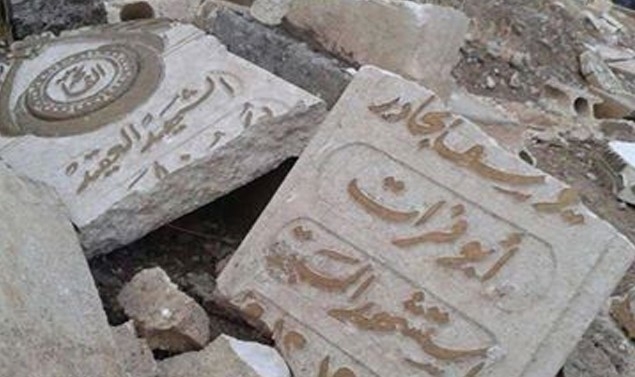 Militants with the Islamic State of Iraq and Syria (ISIS) have destroyed gravestones in the city of Jarablus in Aleppo countryside on Saturday amid heightened criticisms of the group from residents of the city.

The gravestone of the Syrian martyr Abu Furat was one of the tombstones destroyed by the organization.

"I carved my brother's gravestone with my own hands,"   Abu Furat's brother, artist Mohammed al-Jadir said. "Abu Furat does not need a tombstone as his name is engraved in the memory of all the honorable revolutionaries".

In a fatwa regarding tombstones on the graves of Muslims, a sheikh in the city said there is nothing wrong with writing to mark a grave.

"The names of the leaders of Muslims from the east to the west are written on their graves," the sheikh said and narrated a story.

"The Messenger of Allah, peace be upon him, carried a stone and placed it at the head of the grave of Osman bin Mazoun and said: I mark my brother's grave to bury my relatives next to him," he explained.

"Even the graves have not been safe from their hands, they say the shrines are heresy, and they destroy them because some people come to get blessings from them. We said there is no problem with that, but to destroy the tombstones is a horrible act and has no relation to the fatwas of Muslims" one activist said.