President affirms regime's commitment to ending the Syrian crisis through dialogue, claiming backers of terrorism must be dealt with 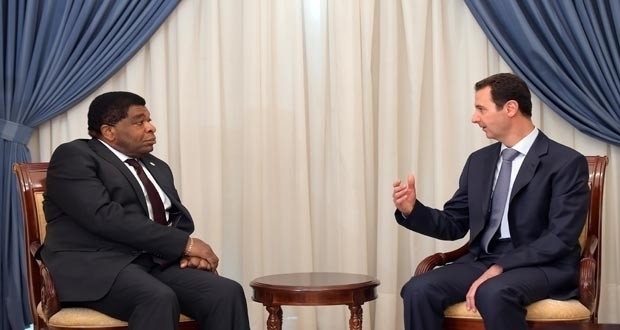 President Bashar al-Assad has stressed that the Syrian state is committed to reaching a solution to the crisis through dialogue, adding that the success of which demands serious pressure on countries involved in the backing of terrorism.

Meeting with the Secretary General of the Inter-Parliamentary Union (IPU) Martin Chungong on Monday, the president clarified that Syria will pursue further national reconciliation and expand its scope, as many local reconciliations have been carried out in various areas nationwide.

The success of dialogue, President Assad affirmed, demands going ahead with combatting terrorism and putting real and serious pressure on the states which are involved in supporting and arming terrorists – a role in whose implementation the IPU and its member states could be quite influential.

Essential to achieving that end, the president said, is becoming acquainted with the reality of the problems facing the world today, while avoiding the political and media-misinformation that was, and still is, being practiced.

This, he stressed, will be very helpful to solving these problems, which result from the lack of communication among countries and their institutions.

The secretary-general voiced the union’s support for Syria in the face of terrorism, which has become an international threat as it is no longer limited to Syria and the Middle East, Chungong said.

Chungong pointed out that his visit to Syria has been useful in terms of closely reviewing the situation and familiarizing himself with the reality on the ground.