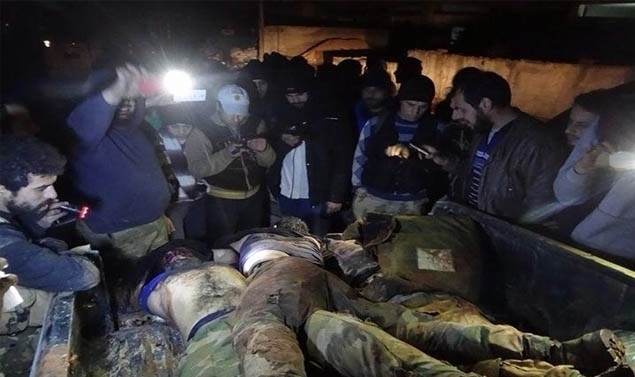 Tuesday recorded the highest death toll among pro-Assad troops since the outbreak of the Syrian revolution in 2011, with 300 pro-regime fighters killed – most of Lebanese, Iranian and Iraqi nationality – according to rebel sources in the villages of Ratyan, Hardatnin and al-Mallah farms.

In northern Aleppo, 150 pro-regime fighters – including a Hezbollah commander – were killed during clashes in Ratyan, with rebels eventually regaining control of the village.

In Handarat, north of Aleppo, rebels killed about 75 pro-regime fighters, including a reporter from Hezbollah's official Al-Manar channel, during continuing clashes in al-Mallah farms, the Pashkoi area and the rebel-held Dwair az-Zaitoun village.

At the western entrance to the city of Aleppo, regime forces were caught sneaking into the southern Rashideen neighborhood, with rebels killing 30 fighters, most of them members of National Defense militias and the Iran’s al-Quds Brigade. Rebels also killed a number of regime forces in the neighborhood of az-Zahra.

In the city’s south, rebels killed 10 members of Assad's forces on the Azizah Front while they were trying to sneak into the rebel-held village of Sheikh Lutfi.