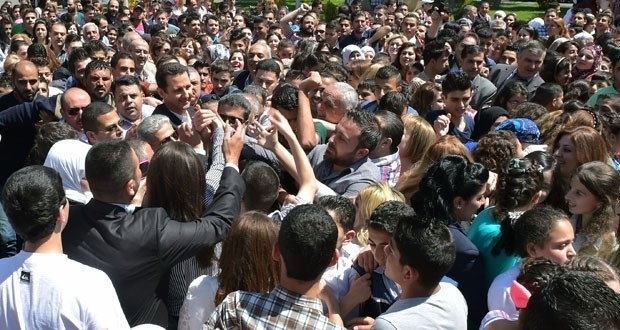 President Bashar al-Assad attended a ceremony on Wednesday organized by the Martyrs’ Sons and Daughters Schools Establishment to honor the children of martyrs who followed in their fathers’ footsteps and joined military academies.

Assad addressed the children of martyrs and the schools’ staff members, saying that he feels great joy when he meets the sons and daughters of martyrs, and that he wanted to join them on this occasion, which takes place on Martyrs Day.

He stressed that Martyrs Day has many values associated with it, some of them symbolic, and some with very tangible with links to the history of Syria. Around 100 years ago, Assad said, the Ottomans carried out a campaign of arrests and executions of Syrian patriots and nationalists. The campaign concluded in 1916 when a large group of nationalists were executed by the Ottomans for defending the Syrian people from oppression.

Assad noted that the Ottomans’ crimes at the time were not restricted to nationalists; they also committed heinous crimes against millions of Armenians, Syriacs, and other groups under their rule. These same massacres are being repeated, in the same way but with different tools and names. The Ottoman Djemal Pasha “the Butcher” had ordered the executions in 1916, and today history repeats itself as his ancestor Erdogan “the Butcher” reenacts these crimes, Assad added.

President Assad underlined that martyrdom is the most noble value to be championed by human beings in defense of their homeland, stressing that the nobility of martyrdom isn’t restricted to the martyrs themselves; rather it extends to all those who continue to champion this value, and none can champion it better than the families of the martyrs.

Assad noted that international propaganda against Syria was recently intensified after failing two years ago, pointing out that the previous propaganda campaigns failed despite being accompanied by more difficult circumstances.

“But the sponsors, promoters, politicians, and journalists who were involved in that campaign crawled back to their holes, and now they re-emerged because they sensed that there’s fertile soil in some people in this country”, he added.

The president called for the awareness of frustration and those who spread it, because psychological defeat means final defeat, adding “but I’m not worried over this, because as the first propaganda campaign failed at the beginning of the crisis, this campaign will fail. There is no concern, but this doesn’t prevent us from warning people that the beginning of frustration leads to defeat”.